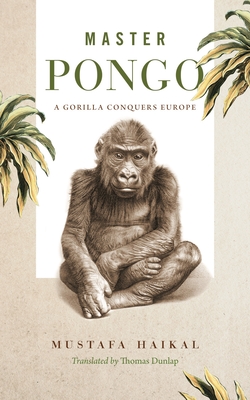 In the summer of 1876, Berlin anxiously awaited the arrival of what was billed as "the most gigantic ape known to zoology." Described by European explorers only a few decades earlier, gorillas had rarely been seen outside of Africa, and emerging theories of evolution only increased the public's desire to see this "monster with human features." However, when he arrived, the so-called monster turned out to be a juvenile male less than thirty-two inches tall.

Known as M'Pungu (Master Pongo), or simply Pongo, the gorilla was put on display in the Unter den Linden Aquarium in the center of Berlin. Expecting the horrid creature described by the news outlets of the time, the crowds who flocked to see Pongo were at first surprised and then charmed by the little ape. He quickly became one of the largest attractions in the city, and his handlers exploited him for financial gain and allowed doctors and scientists to study him closely. Throughout his time in Europe, Pongo was treated like a person in many respects. He drank beer, ate meat, slept at the home of the head of the aquarium, and "visited" London and Hamburg. But this new lifestyle and foreign environment weren't healthy for the little gorilla. Pongo fell ill frequently and died of "consumption" in November 1877, less than a year and a half after being brought to Europe.

An irresistible read, illustrated with contemporaneous drawings, this critical retelling of the expedition that brought Pongo to Berlin and of his short life in Europe sheds important light on human-animal interactions and science at a time in Western society when the theory of evolution was first gaining ground.

Mustafa Haikal is a historian and author of numerous nonfiction books in German. Thomas Dunlap has translated more than fifteen works from German into English.