A Feeling of Wrongness: Pessimistic Rhetoric on the Fringes of Popular Culture (Paperback) 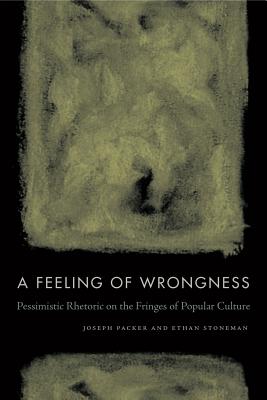 In A Feeling of Wrongness, Joseph Packer and Ethan Stoneman confront the rhetorical challenge inherent in the concept of pessimism by analyzing how it is represented in an eclectic range of texts on the fringes of popular culture, from adult animated cartoons to speculative fiction.

Packer and Stoneman explore how narratives such as True Detective, Rick and Morty, Final Fantasy VII, Lovecraftian weird fiction, and the pop ideology of transhumanism are better suited to communicate pessimistic affect to their fans than most carefully argued philosophical treatises and polemics. They show how these popular nondiscursive texts successfully circumvent the typical defenses against pessimism identified by Peter Wessel Zapffe as distraction, isolation, anchoring, and sublimation. They twist genres, upend common tropes, and disturb conventional narrative structures in a way that catches their audience off guard, resulting in belief without cognition, a more rhetorically effective form of pessimism than philosophical pessimism.

While philosophers and polemicists argue for pessimism in accord with the inherently optimistic structures of expressive thought or rhetoric, Packer and Stoneman show how popular texts are able to communicate their pessimism in ways that are paradoxically freed from the restrictive tools of optimism. A Feeling of Wrongness thus presents uncharted rhetorical possibilities for narrative, making visible the rhetorical efficacy of alternate ways and means of persuasion.

Joseph Packer is Associate Professor of Communication and Dramatic Arts at Central Michigan University. He is the author of Alien Life and Human Purpose: A Rhetorical Examination Through History. Ethan Stoneman is Assistant Professor of Rhetoric and Public Address at Hillsdale College.