Text-Mex: Seductive Hallucinations of the Mexican in America (Paperback) 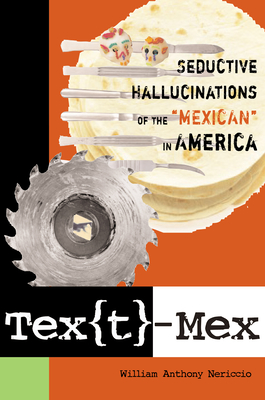 By William Anthony Nericcio
$27.95
Email or call for price.

"Marvels Rompecabezas And cartoons that bite into the mind appear throughout this long-awaited book that promises to reshape and refocus how we see Mexicans in the Americas and how we are taught and seduced to mis/understand our human potentials for solidarity. This is the closest Latin@ studies has come to a revolutionary vision of how American culture works through its image machines, a vision that cuts through to the roots of the U.S. propaganda archive on Mexican, Tex-Mex, Latino, Chicano/a humanity. Nericcio exposes, deciphers, historicizes, and 'cuts-up' the postcards, movies, captions, poems, and adverts that plaster dehumanization (he calls them 'miscegenated semantic oddities') through our brains. For him, understanding the sweet and sour hallucinations is not enough. He wants the flashing waters of our critical education to become instruments of restoration. In this book, Walter Benjamin meets Italo Calvino and they morph into Nericcio. Orale -Dav d Carrasco, Harvard UniversityA rogues' gallery of Mexican bandits, bombshells, lotharios, and thieves saturates American popular culture. Remember Speedy Gonzalez? "Mexican Spitfire" Lupe V lez? The Frito Bandito? Familiar and reassuring-at least to Anglos-these Mexican stereotypes are not a people but a text, a carefully woven, articulated, and consumer-ready commodity. In this original, provocative, and highly entertaining book, William Anthony Nericcio deconstructs Tex t]-Mexicans in films, television, advertising, comic books, toys, literature, and even critical theory, revealing them to be less flesh-and-blood than "seductive hallucinations," less reality than consumer products, a kind of "digital crack." Nericcio engages in close readings of rogue/icons Rita Hayworth, Speedy Gonzalez, Lupe V lez, and Frida Kahlo, as well as Orson Welles' film Touch of Evil and the comic artistry of Gilbert Hernandez. He playfully yet devastatingly discloses how American cultural creators have invented and used these and other Tex t]-Mexicans since the Mexican Revolution of 1910, thereby exposing the stereotypes, agendas, phobias, and intellectual deceits that drive American popular culture. This sophisticated, innovative history of celebrity Latina/o mannequins in the American marketplace takes a quantum leap toward a constructive and deconstructive next-generation figuration/adoration of Latinos in America.

WILLIAM ANTHONY NERICCIO is Professor of English and Comparative Literature at San Diego State University in California, where he also serves on the faculty of the Center for Latin American Studies and the Department of Chicana and Chicano Studies.