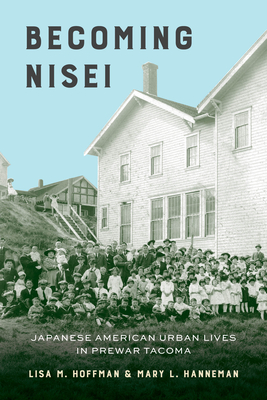 Tacoma's vibrant Nihonmachi of the 1920s and '30s was home to a significant number of first generation Japanese immigrants and their second generation American children, and these families formed tight-knit bonds despite their diverse religious, prefectural, and economic backgrounds. As the city's Nisei grew up attending the secular Japanese Language School, they absorbed the Meiji-era cultural practices and ethics of the previous generation. At the same time, they positioned themselves in new and dynamic ways, including resisting their parents and pursuing lives that diverged from traditional expectations.

Becoming Nisei, based on more than forty interviews, shares stories of growing up in Japanese American Tacoma before the incarceration. Recording these early twentieth-century lives counteracts the structural forgetting and erasure of prewar histories in both Tacoma and many other urban settings after World War II. Lisa Hoffman and Mary Hanneman underscore both the agency of Nisei in these processes as well as their negotiations of prevailing social and power relations.