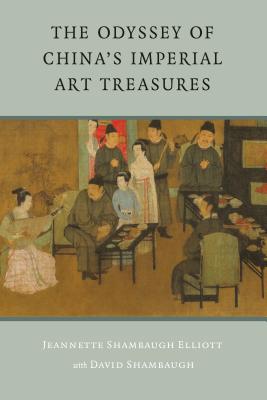 The Odyssey of China's Imperial Art Treasures traces the three-thousand-year history of the emperor's imperial collection, from the Bronze Age to the present. The tortuous story of these treasures involves a succession of dynasties, invasion and conquest, and civil war, resulting in valiant attempts to rescue and preserve the collection. Throughout history, different Chinese regimes used the imperial collection to bolster their own political legitimacy, domestically and internationally.

The narrative follows the gradual formation of the Peking Palace Museum in 1925, then its hasty fragmentation as large parts of the collection were moved perilously over long distances to escape wartime destruction, and finally its formal division into what are today two Palace Museums-one in Beijing, the other in Taipei.

Enlivened by the personalities of those who cared for the collection, this textured account of the imperial treasures highlights magnificent artworks and their arduous transit through politics, war, and diplomatic reconciliations. Over the years, control of the collections has been fiercely contested, from early dynasties through Mongol and Japanese invaders to Nationalist and Communist rivals- a saga that continues today.

This first book-length investigation of the imperial collections will be of great interest to China scholars, historians, and Chinese art specialists. Its tales of palace intrigue will fascinate a wide variety of readers.

Jeannette Shambaugh Elliott (1912-96) was a Sinologist and art collector. David Shambaugh is professor and director of the China Policy Program in the Elliott School of International Affairs at the George Washington University. He is the former editor of The China Quarterly and a preeminent analyst of contemporary Chinese affairs, with numerous publications to his credit.