The Battle for Syria: International Rivalry in the New Middle East (Paperback) 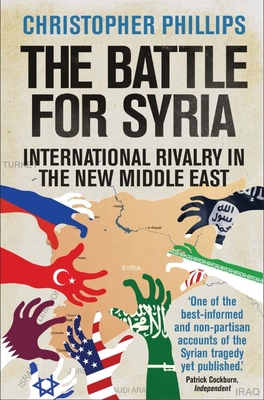 By Christopher Phillips
$20.00
Possibly out of print. Email or call to check availability and price.

Most accounts of Syria’s brutal, long-lasting civil war focus on a domestic contest that began in 2011 and only later drew foreign nations into the escalating violence. Christopher Phillips argues instead that the international dimension was never secondary but that Syria’s war was, from the very start, profoundly influenced by regional factors, particularly the vacuum created by a perceived decline of U.S. power in the Middle East. This precipitated a new regional order in which six external protagonists—the United States, Russia, Iran, Saudi Arabia, Turkey, and Qatar—have violently competed for influence, with Syria a key battleground.

Drawing on a plethora of original interviews, Phillips constructs a new narrative of Syria’s war. Without absolving the brutal Bashar al-Assad regime, the author untangles the key external factors which explain the acceleration and endurance of the conflict, including the West’s strategy against ISIS. He concludes with some insights on Syria and the region's future.

"Philips . . . argues in a lucid and readable manner with a good balance of facts and anecdotes, that while domestic triggers and the wider impact of the Arab Spring may have caused the crisis, it was maintained by 'external powers being unwilling to prioritise ending the conflict over their own wider geopolitical agendas.'"—James Denselow, New York Journal of Books

"This is the best work to date that focuses on the regional and international dimensions of the Syrian conflict. Christopher Phillips' research is meticulous, with both depth and breadth in large part gleaned from his interviews with top officials and representatives from most of the stakeholder states and groups in the war. A must-read for anyone who wants to better understand the multidimensional complexities of the conflict."—David Lesch, author of Syria: The Fall of the House of Assad

"Syria's horrific civil war has been profoundly shaped by the competitive interventions and proxy wars by external powers. The Battle for Syria offers a brilliant, essential account of the international dimension of Syria's descent from uprising into insurgency and brutal state violence. This sober and judicious book will become a standard text for those seeking to understand Syria's tragedy."—Marc Lynch, author of The New Arab Wars: Anarchy and Uprising in the Middle East