Endless Endless: A Lo-Fi History of the Elephant 6 Mystery (Hardcover) 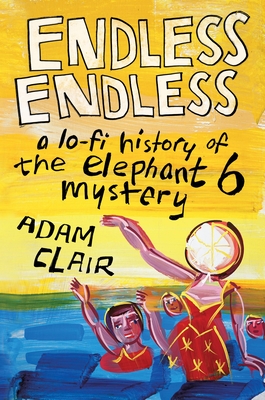 A good story of a whole interconnected group of some truly talented and creative artists.

There is something incredibly sweet about the history of these bands and this collective. Neutral Milk Hotel, Olivia Tremor Control, Apples In Stereo, etc...the sounds that were merging/melding within this group of friends and comrades created some really special music. The book will make you nostalgic for a world that existed 20-25 years ago whether you were there or not.

An inspiring, revelatory exploration of the genesis and impact of the fabled Elephant 6 collective and the baffling exodus of its larger-than-life luminary, Neutral Milk Hotel frontman Jeff Mangum

Years after its release, Neutral Milk Hotel’s In the Aeroplane Over the Sea remains one of the most beloved and best-selling albums in all of indie music, hailed as a classic so influential as to be almost synonymous with the ongoing vinyl revival. But despite its outsized impact, a question looms even larger: why did frontman Jeff Mangum, just as the record propelled him to the brink of music superstardom, choose instead to disappear entirely? The mystery has perplexed listeners for decades—until now.

In barely two years, Neutral Milk Hotel rose from house show obscurity in Athens, Georgia, to widespread hype and critical acclaim, selling out rock clubs across the country and gracing the tops of numerous year-end best-of lists. But just as his band was reaching the escape velocity necessary to ascend from indie rock success to mainstream superstar, Mangum hit the eject button. After the 1998 release of Aeroplane and a worldwide tour to support it, Mangum stopped playing shows, releasing new music, or even doing interviews. He never explained why, not even to his friends or colleagues, but thanks to both the strength of Aeroplane and his vexing decision to walk away from rock stardom, Neutral Milk Hotel’s impact only grew from there. In Endless Endless, Adam Clair finds the answer to indie rock’s biggest mystery, which turns out to be much more complicated and fascinating than the myths or popular speculation would have you believe.

To understand Mangum and Neutral Milk Hotel and Aeroplane requires a deep dive into the unconventional inner workings of the mercurial collective from which they emerged, the legendary Elephant 6 Recording Company. Endless Endless details the rise and fall of this radical music scene, the lives and relationships of the artists involved and the colossal influence that still radiates from it, centered around the collective’s accidental figurehead, one of the most idolized and misunderstood artists in the world, presenting Mangum and his collaborators in vividly human detail and shining a light into the secret world of these extraordinary and aggressively bizarre artists.

Endless Endless offers unprecedented access to this notoriously mysterious collective, featuring more than 100 new interviews and dozens of forgotten old ones, along with never-before-seen photos, answering questions that have persisted for decades while also provoking new ones. In this deeply researched account, Endless Endless examines not just how the Elephant 6 came to be so much more than the sum of its parts, but how community can foster art—and how art can build community.

Adam Clair is a writer based in Philadelphia, Pennsylvania. His work has appeared in Stereogum, Vice, The Verge, Paste, Real Life, Flagpole, and on WHYY.

"Effective and entertaining… an enduring indie rock mystery that shines a light on the power of community and creativity.”—Kirkus Reviews

“Elephant 6 was the model for our little scene in Bellingham in the late nineties. I adored their music, and what they taught me about community, friendship, and creative collaboration were lessons I’ve carried with me ever since. Every aspiring, independently minded artist should read this book.”
—Benjamin Gibbard (Death Cab for Cutie)

“Endless Endless is a kaleidoscopic ride through the magical, cacophonous, punk-pop world of Elephant 6 bands. The story of this unique musical community explains why so many of us make music despite all obstacles—and also documents a parallel universe to the late-nineties corporate major label music scene. Reading this book captures the spirit and the joy of music that comes from the heart.”—Naomi Yang (Galaxie 500, Damon & Naomi)

“While their sales always belied their inspiring communal spirit, creativity, ambition, and (as we now see) far-reaching influence, the bands of the so-called Elephant 6 collective have long deserved the kind of thorough biography and scene overview that Adam Clair provides in Endless Endless. Music journalism and criticism at its best, Clair makes it as fun and trippy to read about Neutral Milk Hotel, the Apples in Stereo, and the Olivia Tremor Control as it is to listen to their recordings. And you don't even need a cassette deck!”—Jim DeRogatis, music journalist and critic, Sound Opinions co-host

“Elephant 6 stormed Athens and breathed new energy into an already stratospherically creative scene. Their love of music was and is remarkable.”—Michael Stipe

“A thorough and accurate look at Elephant 6! It's wild that I played music with some of these people for around 20 years and didn't know some of this stuff. A fascinating read!”—John Kiran Fernandes (The Olivia Tremor Control, Circulatory System, Cloud Recordings)

“The Elephant 6 collective stands as part of and apart from the wonderful and world class music scene of Athens, Georgia. Endless Endless provides an in-depth look at wonders and mysteries of its creation and lasting impact. It’s also a great read.”—Patterson Hood, writer and artist (The Drive-By Truckers)

“It's the ultimate dream for any musician throughout their career to be surrounded by a community full of geniuses and freaks supporting and contributing to each other’s art, and that's exactly what E6 was. Endless Endless perfectly captures the beautiful and complex dynamics between the longtime friends and bandmates involved in E6, and it left me longing for the era of four-track recording, mixtapes, and the inspiration that is so powerfully fostered by close-knit, small town communities. Indie music truly would not be where it is today without all of these artists paving the way!”—Julia Shapiro (Chastity Belt)

“Endless Endless is an intimate portrait of a small, out-of-the-way scene touched by magic. It captures the raw thrill of creative discovery in the time before digital culture took over our lives, and it’s a testament to the power of friendship, showing what can happen when you find your people and make your own world.”—Mark Richardson, rock and pop critic for the Wall Street Journal and former Editor-in-Chief of Pitchfork

“Part oral history, part celebration, part mystery, Endless Endless is a lovely, compulsively readable book about a musical movement that was as important and lasting as it was humble and modest. Adam Clair clearly adores this world and draws us into it with deep research and sharp perspective, but, more than anything, laid-back, endearing prose that draws you in and lets you be a part. Reading this book makes you feel like you’re listening to the music it chronicles, which might be the best compliment, among many, that I can give it.”—Will Leitch, author of How Lucky

“Everyone who listened to (and became obsessed with) In the Aeroplane Over the Sea has wondered, at some point, how the hell such a masterwork could've emerged, seemingly out of nowhere. Endless Endless answers that question by meticulously tracking the artists and themes and magic that led to the seminal indie rock album of our generation. I still regret that I missed a Neutral Milk Hotel concert in Boston in 1997. I thought they'd be around forever, that there was no rush. Adam Clair has given me the next best thing: the definitive story of who they were, where they came from, and how they assembled one of the greatest indie rock records of all time.”—Michael Schur, TV writer/producer and creator of The Good Place