One Day When I Was Lost: A Scenario Based on Alex Haley's The Autobiography of Malcolm X (Vintage International) (Paperback) 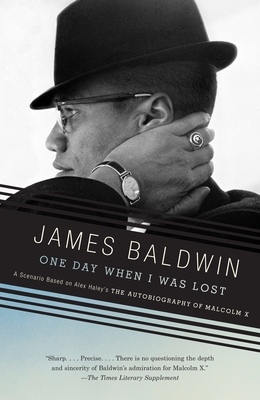 A rare, lucidly composed screenplay from one of America’s greatest writers, based on the bestselling classic The Autobiography of Malcolm X. The Times Literary Supplement praises "the depth and sincerity of Baldwin's admiration for Malcolm X."
Son of a Baptist minister; New York City hustler; honor student; convicted criminal; powerful minister in the Nation of Islam; father and husband: Malcolm X transformed himself, time and again, in order to become one of the most feared, loved, and undeniably charismatic leaders of twentieth-century America. No one better represents the tumultuous times of his generation, and there is no one better to capture him and his milieu than James Baldwin. With spare, elegant, yet forceful dialogue and fresh, precise camera directions, Baldwin breathes cinematic life into this controversial and important figure, offering a new look at a man who changed himself in order to change the country.

James Baldwin was born in 1924 and educated in New York. He is the author of more than twenty works of fiction and nonfiction.

"Sharp.... Precise.... There is no questioning the depth and sincerity of Baldwin's admiration for Malcolm X." —The Times Literary Supplement

"A work energetically and demotically written." —The New Statesman