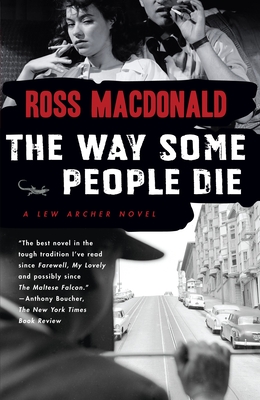 This is book number 3 in the Lew Archer Series series.

In a rundown house in Santa Monica, Mrs. Samuel Lawrence presses fifty crumpled bills into Lew Archer's hand and asks him to find her wandering daughter, Galatea. Described as ‘crazy for men’ and without discrimination, she was last seen driving off with small-time gangster Joe Tarantine, a hophead hood with a rep for violence. Archer traces the hidden trail from San Francisco slum alleys to the luxury of Palm Springs, traveling through an urban wilderness of drugs and viciousness. As the bodies begin to pile up, he finds that even angel faces can mask the blackest of hearts.Filled with dope, delinquents and murder, this is classic Macdonald and one of his very best in the Lew Archer series.

Ross Macdonald's real name was Kenneth Millar. Born near San Francisco in 1915 and raised in Vancouver, British Columbia, Millar returned to the U.S. as a young man and published his first novel in 1944. He served as the president of the Mystery Writers of America and was awarded their Grand Master Award as well as the Mystery Writers of Great Britain's Silver Dagger Award. He died in 1983.

“The best novel in the tough tradition I've read since Farewell, My Lovely and possibly since The Maltese Falcon.”—Anthony Boucher, The New York Times Book Review“The greatest American mystery novelist. Macdonald imbued the mystery with the qualities of a full-bodied novel: impeccable plotting, a sense of place, a careful delineation of human psychology, and a perfect fusion of story and character.”—Richard North Patterson“Ross Macdonald gives to the detective story that accent of class that Raymond Chandler did.”—The Chicago Tribune