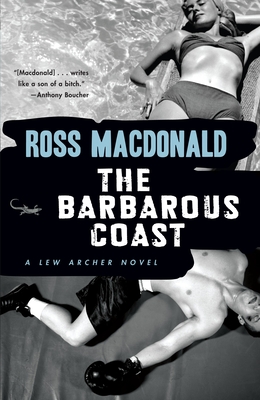 This is book number 6 in the Lew Archer Series series.

The beautiful, high-diving blonde had Hollywood dreams and stars in her eyes but now she seems to have disappeared without a trace. Hired by her hotheaded husband and her rummy “uncle,” Lew Archer sniffs around Malibu and finds the stink of blackmail, blood-money, and murder on every pricey silk shirt. Beset by dirty cops, a bumptious boxer turned silver screen pretty boy and a Hollywood mogul with a dark past, Archer discovers the secret of a grisly murder that just won't stay hidden.Lew Archer navigates through the watery, violent world of wealth and privilege, in this electrifying story of obsession gone mad.

Ross Macdonald's real name was Kenneth Millar. Born near San Francisco in 1915 and raised in Ontario, Millar returned to the U.S. as a young man and published his first novel in 1944. He served as the president of the Mystery Writers of America and was awarded their Grand Master Award as well as the Mystery Writers of Great Britain's Gold Dagger Award. He died in 1983.

“Ross Macdonald writes like a son-of-a-bitch.” —Anthony Boucher“Not since the novels of Nathanael West has the theme of American innocence grinding to a stop at the polluted waters of the Pacific so consistently reverberated through a body of writing.” —Detroit News“Macdonald makes a routine story of ocean-side murder among the rich take on a hard-edged, glistening solidity.” —AudioFile