Physics of the Future: How Science Will Shape Human Destiny and Our Daily Lives by the Year 2100 (Paperback) 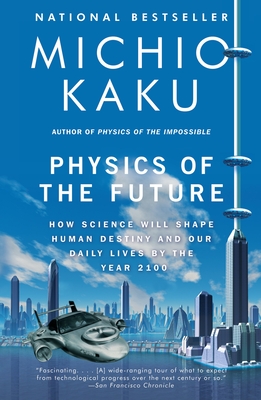 Space elevators. Internet-enabled contact lenses. Cars that fly by floating on magnetic fields. This is the stuff of science fiction—it’s also daily life in the year 2100.

Renowned theoretical physicist Michio Kaku details the developments in computer technology, artificial intelligence, medicine, space travel, and more, that are poised to happen over the next hundred years. He also considers how these inventions will affect the world economy, addressing the key questions: Who will have jobs? Which nations will prosper? Kaku interviews three hundred of the world’s top scientists—working in their labs on astonishing prototypes. He also takes into account the rigorous scientific principles that regulate how quickly, how safely, and how far technologies can advance. In Physics of the Future, Kaku forecasts a century of earthshaking advances in technology that could make even the last centuries’ leaps and bounds seem insignificant.

MICHIO KAKU is a professor of physics at the CUNY Graduate Center, cofounder of string field theory, and the author of several widely acclaimed science books, including Physics of the Impossible, also the basis for his Science Channel show and two radio programs, Explorations and Science Fantastic.

“Fascinating.... [A] wide-ranging tour of what to expect from technological progress over the next century or so.” —Wall Street Journal

“Mak[es] the exponential character of technological progress stick in the reader’s head, so that they come to look at the world differently.” —The Sunday Telegraph (London)

“[Physics of the Future] has the ability to surprise and enthrall and frighten.” —The New York Times

“[Kaku] has the rare ability to take complicated scientific theories and turn them into readable tales about what our lives will be like in the future.... Fascinating. And just a little bit spooky.” —USA Today

“Kaku is a tireless science popularizer.... [He gets] the juices of future physicists flowing.” —Los Angeles Times

“[Kaku] has a knack for making complex ideas entertaining.” —The Charlotte Observer

"One cannot help but feel buoyed that the miraculous world the author presents may really be less than a hundred years hence." —Louisville Courier-Journal