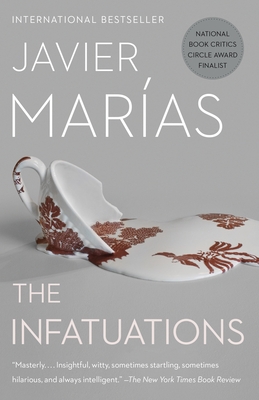 Each day before work María Dolz stops at the same café. There she finds herself drawn to a couple who is also there every morning. Observing their seemingly perfect life helps her escape the listlessness of her own. But when the man is brutally murdered and María approaches the widow to offer her condolences, what began as mere observation turns into an increasingly complicated entanglement. Invited into the widow's home, she meets--and falls in love with--a man who sheds disturbing new light on the crime. As María recounts this story, we are given a murder mystery brilliantly encased in a metaphysical enquiry, a novel that grapples with questions of love and death, chance and coincidence, and above all, with the slippery essence of the truth and how it is told.

JAVIER MARÍAS was born in Madrid in 1951. He has published fifteen novels, including The Infatuations and A Heart So White, as well as three collections of short stories and several volumes of essays. His work has been translated into forty-four languages, has sold more than eight and a half million copies worldwide, and has won a dazzling array of international literary awards, including the prestigious International IMPAC Dublin Literary Award and the Prix Femina Étranger. He died in 2022.

“The Infatuations is mysterious and seductive; it’s got deception, it’s got love affairs, it’s got murder. . . sheerly addictive.”—Fresh Air/NPR

“An arresting story of love and crime.”—San Francisco Chronicle

“The unspoken romance at the heart of Marías’s work is the recuperation of old-fashioned adventure within perfectly serious, cerebral contemporary fiction.”—The Daily Beast

“Great art often emerges from breaking, or at least tweaking, rules. A work that transcends its conventions can produce special results. Here’s such a book . . . The Infatuations takes you where very few novels do.”—Paste magazine

“A masterly novel . . . The classical themes of love, death, and fate are explored with elegant intelligence by Marías in what is perhaps his best novel so far . . . Extraordinary . . . Marías has defined the ethos of our time.”—The Guardian, UK

“Javier Marías is a master of first lines. He’s a master of other things as well . . . All Marías books feel like chapters in one much longer book. And it’s one you should start reading, if you haven’t already.”—Slate

“Beyond the interesting ideas his work draws on, Marías’s novels are simply a pleasure to read . . . The Infatuations, containing the qualities of Marías’s best work, is an important addition to his oeuvre.”—The Millions

“Marías’s novel operates on so many levels simultaneously, it becomes a piece of evidence itself, an artifact that proves its own argument.”—The Onion, A. V. Club

“Marías’s novel weaves an intricate web, but its triumph is in the power of its narrator. Marías has found the ideal voice—detached, inquisitive, and vigilant—for one of his finest novels.”—Los Angeles Review of Books