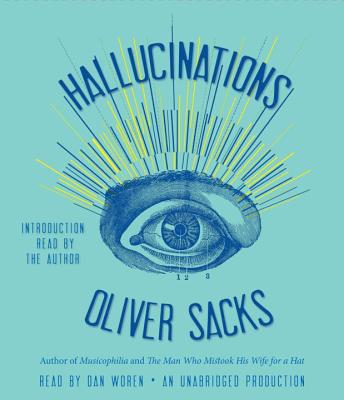 Have you ever seen something that wasn t really there? Heard someone call your name in an empty house? Sensed someone following you and turned around to find nothing?
Hallucinations don t belong wholly to the insane. Much more commonly, they are linked to sensory deprivation, intoxication, illness, or injury. People with migraines may see shimmering arcs of light or tiny, Lilliputian figures of animals and people. People with failing eyesight, paradoxically, may become immersed in a hallucinatory visual world. Hallucinations can be brought on by a simple fever or even the act of waking or falling asleep, when people have visions ranging from luminous blobs of color to beautifully detailed faces or terrifying ogres. Those who are bereaved may receive comforting visits from the departed. In some conditions, hallucinations can lead to religious epiphanies or even the feeling of leaving one's own body.
Humans have always sought such life-changing visions, and for thousands of years have used hallucinogenic compounds to achieve them. As a young doctor in California in the 1960s, Oliver Sacks had both a personal and a professional interest in psychedelics. These, along with his early migraine experiences, launched a lifelong investigation into the varieties of hallucinatory experience.
Here, with his usual elegance, curiosity, and compassion, Dr. Sacks weaves together stories of his patients and of his own mind-altering experiences to illuminate what hallucinations tell us about the organization and structure of our brains, how they have influenced every culture's folklore and art, and why the potential for hallucination is present in us all, a vital part of the human condition.
Permissions Acknowledgments
Grateful acknowledgment is made to the following for permission to reprint previously published material:
American Academy of Neurology: Excerpt from Anton's Syndrome Accompanying Withdrawal Hallucinosis in a Blind Alcoholic by Barbara E. Swartz and John C. M. Brust from Neurology 34 (1984). Reprinted by permission of the American Academy of Neurology as administered by Wolters Kluwer Health Medical Research.
American Psychiatric Publishing: Excerpt from Weir Mitchell's Visual Hallucinations as a Grief Reaction by Jerome S. Schneck, M.D., from American Journal of Psychiatry (1989). Copyright (c) 1989 by American Journal of Psychiatry. Reprinted by permission of American Psychiatric Publishing a division of American Psychiatric Association.
BMJ Publishing Group Ltd.: Excerpt from Heautoscopy, Epilepsy and Suicide by P. Brugger, R. Agosti, M. Regard, H. G. Wieser and T. Landis from Journal of Neurology, Neurosurgery and Psychiatry, July 1, 1994. Reprinted by permission of BMJ Publishing Group Ltd. as administered by the Copyright Clearance Center.
Cambridge University Press: Excerpts from Disturbances of the Mind by Douwe Draaisma, translated by Barbara Fasting. Copyright (c) 2006 by Douwe Draaisma. Reprinted by permission of Cambridge University Press.
Canadian Psychological Association: Excerpt from Effects of Decreased Variation of the Sensory Environment by W. H. Bexton, W. Heron and T. H. Scott from Canadian Psychology (1954). Copyright (c) 1954 by Canadian Psychological Association. Excerpt from Perceptual Changes after Prolonged Sensory Isolation (Darkness and Silence) by John P. Zubek, Dolores Pushkar, Wilma Sansom and J. Gowing from Canadian Psychology (1961). Copyright (c) 1961 by Canadian Psychological Association. Reprinted by permission of Canadian Psychological Association.

OLIVER SACKS is a practicing physician and the author of 10 books, including The Mind's Eye, Musicophilia, The Man Who Mistook His Wife for a Hat and Awakenings (which inspired the Oscar-nominated film). He lives in New York City, where he is a professor of neurology and psychiatry at Columbia University Medical Center and the first Columbia University Artist. The author lives in New York, NY.

“Although the descriptions of hallucinations are interesting in their own right, what gives real substance to the book on two levels are Sacks’s explanations of the causes of various hallucinatory phenomena and his notes on the history of the science, the scientists, and the physicians who have sought to explain these phenomena. Overall, Sacks does a commendable job of explaining the workings of the brain in an accessible manner….That said, even the most erudite of readers is likely to learn something new.” –American Psychological Association

“Absorbing…Dr. Sacks provides what he calls a kind of ‘natural history or anthology of hallucinations’ drawn from his patients’ experiences, his own observations and from literature on the subject...Sacks conjures these apparitions in language that has an easy, tactile magic. As he’s done in so many of his earlier books, like The Man Who Mistook His Wife for a Hat and An Anthropologist on Mars, he uses his medical knowledge to illuminate the complexities of the human brain and the mysteries of the human mind. At the same time, his compassion for his patients and his own philosophical outlook turn what might have been clinical case studies into humanely written short stories, animated as much by an intuitive appreciation of the human condition as by scientific understanding.” –Michiko Kakutani, The New York Times

“Effective—largely because Sacks never turns exploitative, instead sketching out each illness with compassion and thoughtful prose. A riveting look inside the human brain and its quirks.” –Kirkus

“Fascinating…Writing with his trademark mix of evocative description, probing curiosity, and warm empathy, Sacks once again draws back the curtain on the mind’s improbable workings.” –Publishers Weekly

“Sacks’ best-selling nonfiction stories based on his practice of clinical neurology constitute one shining reason for thinking that we’re living in a golden age of medical writing…Sacks defines the best of medical writing.” –Booklist

“Another gem of a book…With a fine sense of narrative, Sacks deftly integrates literature, art, and medical history around his very human, often riveting, case histories. This book is recommended for all readers, not just those with symptoms! This is a model of humane science made compellingly readable.” –Library Journal, starred review

“This doctor cares deeply about his patients' experiences—about their lives, not just about their diseases. Through his accounts we can imagine what it is like to find that our perceptions don't hook on to reality—that our brains are constructing a world that nobody else can see, hear or touch…Sacks has turned hallucinations from something bizarre and frightening into something that seems part of what it means to be a person. His book, too, is a medical and human triumph.” –Washington Post

“Sacks’ science writing is always revelatory, and there are moments in Hallucinations when seeing things can feel downright life-affirming.” –Time

“Oliver Sacks is my hero, so any book he publishes is a book of the year for me…His book explores not only his own experiences but a wide variety of conditions that can cause patients to see things that aren't there, and his writing is characterized by a mix of close-focus scientific scrutiny and broad human sympathy.” –Hilary Mantel, Wall Street Journal Favorites of 2012

"Fascinating…Dr. Sacks’s compassion for his patients and philosophical outlook transform what might have been clinical case studies into humanely written short stories that illuminate the complexities of the human brain and the mysteries of the human mind." –Michiko Kakutani, New York Times Top Ten of the Year

“A thoughtful and compassionate look at the phantoms our brains can produce.” –NPR

“A brisk but characteristically absorbing survey of the many ways human beings perceive things that are not there…[Sacks] conveys, as ever, an expansive enthusiasm for the brain itself, for its complexity and resilience and for the myriad ways that the individual owners of remarkable brains have learned to understand, cope with, and even relish their own neural eccentricities.” –Laura Miller, Salon

“Should be required reading for anyone in a caregiver position…Sacks, a practicing neurologist in New York City, blends centuries-old medical wisdom, current research, and observation of his own patients into an engaging summary of every way our brains seek to depart from reality…Sacks writes with uncommon clarity.” –St. Louis Post-Dispatch

“In this fascinating and engaging ‘anthology of hallucinations,’ Sacks uses the unique mixture of patient anecdote, memoir, scientific information, and broad reference to literature, art, music, history, and philosophy that has characterized all his work to explore various types of visual, auditory, tactile, and other illusory sensations.” –Boston Globe

“Sacks is one of the great scientific writers of our time.” –Baltimore City Paper

“[Sacks] is particularly adept at giving readers and overarching view of hallucinations through time, finding just the right obscure journal article or bygone diary entry form which to quote…Each chapter features personal stories of those who have experienced hallucinations. These tales are at turns delightful, entertaining, bizarre and sometimes downright terrifying. Those willing to open up to Sacks about their experiences did so in the hope of shedding light upon this misunderstood topic. They could not have turned to a more trusted source.” –Minneapolis Star Tribune

“Sacks is that unique scientific raconteur, with a spellbinding gift for recording the experiences of his own patients and collecting remarkable personal anecdotes from colleagues, correspondents, and the literature…It is remarkable to see the consistency of this literate, inquiring mind, the scrupulous attention to details, the interwoven themes from earlier books, and the constant joy of the frequently incredible and always miraculous ways that human experience can respond to stress and adapt to deficit and disease.” –Philadelphia Inquirer

“With his special mix of patient case studies, historical accounts, reader correspondence and personal experience, Oliver Sacks has again found a way to unlock one of the mysteries of our brains…fascinating and often funny.” –The Miami Herald

“Super-fascinating and accessible…Sacks is crazy-smart, and it shows. But he’s also just flat-out amazed by the brain, and it’s an enthusiasm you can’t help but catch.” –Book Riot

“Sacks writes, as usual, with a sharp mix of clinical precision, curiosity, and compassion.” –The Daily Beast

“[Sacks’] gentle, humane acceptance of the vast variety of mental experience is both reassuring and provocative.” –The Columbus Dispatch

“Sacks manages to make something beguiling of the many ways our brains trick us…astonishing.” –Chicago Tribune

“Hallucinations seeks to work against our preconceptions, whether they have to do with clinical distance or the larger question of what hallucination means…fascinating.” –Newark Star Ledger

“Learned but not pretentious, fine but not ostentatious, informative but not dense…The successful integration of so many disparate materials, and kinds of materials, keeps the pace of Hallucinations lively…As does Sacks’ ability to explain the physiological mechanisms at work in the production of hallucinations without detracting from their essential strangeness.” –Pop Matters

“Science begins and ends with us. It is a very welcome shock when the bearer of this news is also a fluid and generous writer, a polymath who over the course of a dozen books has given us back our brains…Nowhere is the artistic creativity of the human mind more vividly on display…with Oliver Sacks as our guide, a trip to the familiar always becomes enchantingly, enduringly, strange.” –Barnes and Noble Review

“Fascinating…Sacks has given the world great gifts through his writing about neuroscience and his compassionate treatment of patients.” –The Fix

“Sacks’ book comes at a time of exciting developments in hallucination science…It is observations such as these, derived from the consulting room, that challenge the neuroscience of perception—and Sacks is leading the way.” –Nature

“A fascinating and accessible read.” –Time Out Chicago