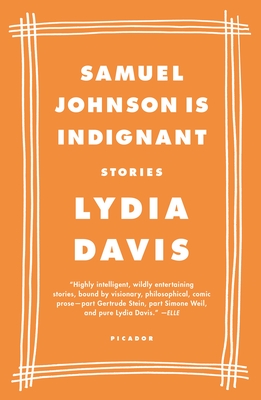 By Lydia Davis
$16.00
Possibly out of print. Email or call to check availability and price.

From one of our most imaginative and inventive writers, a crystalline collection of perfectly modulated, sometimes harrowing and often hilarious investigations into the multifaceted ways in which human beings perceive each other and themselves. A couple suspects their friends think them boring; a woman resolves to see herself as nothing but then concludes she's set too high a goal; and a funeral home receives a letter rebuking it for linguistic errors. Lydia Davis once again proves in the words of the Los Angeles Times "one of the quiet giants in the world of American fiction."

Lydia Davis is the author of Essays One, a collection of essays on writing, reading, art, memory, and the Bible. She is also the author of The End of the Story: A Novel and many story collections, including Varieties of Disturbance, a finalist for the 2007 National Book Award for Fiction; Can’t and Won’t (2014); and The Collected Stories of Lydia Davis, described by James Wood in The New Yorker as “a grand cumulative achievement.” Davis is also the acclaimed translator of Swann’s Way and Madame Bovary, both awarded the French-American Foundation Translation Prize, and of many other works of literature. She has been named both a Chevalier and an Officier of the Order of Arts and Letters by the French government, and in 2020 she received the PEN/Malamud Award for Excellence in the Short Story.

"Davis should be counted among the true originals of contemporary American short fiction."—San Francisco Chronicle

"Her stories are intellectual and playful, and rigorous as brainteasers."—Bookforum

"If you're smart, chances are good you'll read the stories in Lydia Davis's Samuel Johnson is Indignant."—Vanity Fair

"Lydia Davis is the kind of writer that makes you say, 'Oh, at last.' "—Grace Paley

"Precise and quietly unsettling...There is a precision of language and of feeling that is uniquely moving and uniquely her own."—Detroit Free Press

"Introspective and subversive, ironic and playful, obsessive and funny, Davis's stories reveal the ratcheting of the imagination and the ineffable movement of the mind over the varied textures of daily life."—Salon

"Superb...One celebrates a writer like Davis for her intelligent interpreting of the world and her risky bid to reveal the brilliant machinations of her own uniquely gifted mind."—Elle