The Book of Illusions: A Novel (Paperback) 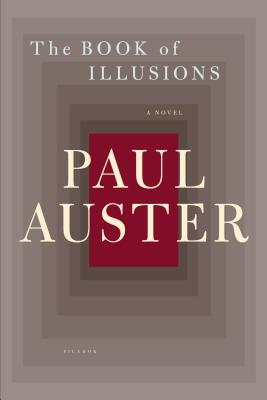 Six months after losing his wife and two young sons, Vermont Professor David Zimmer spends his waking hours mired in a blur of alcoholic grief and self-pity. One night, he stumbles upon a clip from a lost film by silent comedian Hector Mann. His interest is piqued, and he soon finds himself embarking on a journey around the world to research a book on this mysterious figure, who vanished from sight in 1929.

When the book is published the following year, a letter turns up in Zimmer's mailbox bearing a return address from a small town in New Mexico inviting him to meet Hector. Zimmer hesitates, until one night a strange woman appears on his doorstep and makes the decision for him, changing his life forever.

Paul Auster is the bestselling author of 4 3 2 1, Sunset Park, Invisible, The Book of Illusions, and the New York Trilogy, among many other works. In 2006 he was awarded the Prince of Asturias Prize for Literature. Among his other honors are the Prix Médicis étranger for Leviathan, the Independent Spirit Award for the screenplay of Smoke, and the Premio Napoli for Sunset Park. In 2012, he was the first recipient of the NYC Literary Honors in the category of fiction. He has also been a finalist for the International IMPAC Dublin Literary Award (The Book of Illusions), the PEN/Faulkner Award (The Music of Chance), the Edgar Award (City of Glass), and the Man Booker Prize (4 3 2 1). He is a member of the American Academy of Arts and Letters and a Commandeur de l’Ordre des Arts et des Lettres. His work has been translated into more than forty languages. He lives in Brooklyn, New York.

“A nearly flawless work . . . Auster will be remembered as one of the great writers of our time.” —San Francisco Chronicle

“This noirish, layered tale will keep you guessing to the very end.” —Time Out New York