The Friends of Eddie Coyle: A Novel (Paperback) 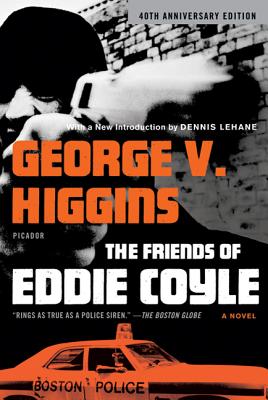 A crime classic told almost entirely in long stretches of stylized dialogue, capturing each individual voice with an easy verisimilitude. In the process of facilitating a string of clever bank robberies, the titular Eddie Coyle deals with a whole mess of shady characters in the Boston criminal element, including a young guy who, whether or not either can admit it, might be headed down the exact same path as old Eddie.

The classic novel from "America's best crime novelist" (Time), with a new introduction by Dennis Lehane

George V. Higgins's seminal crime novel is a down-and-dirty tale of thieves, mobsters, and cops on the mean streets of Boston. When small-time gunrunner Eddie Coyle is convicted on a felony, he's looking at three years in the pen--that is, unless he sells out one of his big-fish clients to the DA. But which of the many hoods, gunmen, and executioners whom he calls his friends should he send up the river? Told almost entirely in crackling dialogue by a vivid cast of lowlifes and detectives, The Friends of Eddie Coyle is one of the greatest crime novels ever written.

George V. Higgins (1939-1999) was a lawyer, journalist, teacher, and the author of 29 books, including Bomber's Law, Trust , and Kennedy for the Defense. His seminal crime novel The Friends of Eddie Coyle was the basis for the 1973 Robert Mitchum film of the same name.

Dennis Lehane is the author of novels, a collection of short stories and a play. He and his wife, Angie, divide their time between Boston and the Gulf Coast of Florida.

“Simultaneously a brilliant thriller and a cold and convincing business prospectus of felony--a profession that traps both sides, gunmen and policemen, into ceaseless compulsory degradation.” —The New Yorker

“Chilling . . . The most penetrating glimpse yet into what seems the real world of crime. . . . Positively reeking with authenticity.” —The New York Times Book Review

“Truly a bravura performance. Higgins is a master of colorful street language heard around Boston. Throughout the novel, without quaintness or self-parody, he is able to sustain long arias of criminal shoptalk. . . . A sophisticated thriller.” —Time

“Weighed and calibrated like the barrel of a pistol. The fact that he's writing about crooks is crucial in some ways, incidental in others. The real subjects here are life's futility and its bleak humor… Elmore Leonard learned from this novel, likewise David Mamet and of course Quentin Tarantino, who saw the narrative virtue in marrying violence to comedies of manners…. Higgins took the tough-guy novel into areas of demented anthropology and re-created a genre.” —Richard Rayner, Los Angeles Times

“Rings true as a police siren.” —The Boston Globe

“The most powerful and frightening crime novel that I have read this year. It will be remembered long after the year is over, as marking the debut of a fine original talent.” —Ross Macdonald

“The first thing to know about George V. Higgins' The Friends of Eddie Coyle is that it directly entered the crime-fiction canon upon its 1970 publication. The second thing to know is that it holds up as both a writer's-writer thriller and as popular pulp, with Dennis Lehane introducing Picador's new 40th-anniversary reissue of the novel by heralding it as ‘the game-changing crime novel of the last fifty years'--a moderate claim compared to that of Elmore Leonard, who hails it as the best crime novel period.” —Troy Patterson, SLATE