Consider the Lobster: And Other Essays (Paperback) 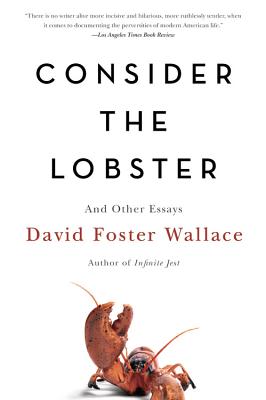 This celebrated collection of essays from the author of Infinite Jest is "brilliantly entertaining...Consider the Lobster proves once more why Wallace should be regarded as this generation's best comic writer" (Cleveland Plain Dealer).

Do lobsters feel pain? Did Franz Kafka have a funny bone? What is John Updike's deal, anyway? And what happens when adult video starlets meet their fans in person?

David Foster Wallace answers these questions and more in essays that are also enthralling narrative adventures. Whether covering the three-ring circus of John McCain's 2000 presidential race, plunging into the wars between dictionary writers, or confronting the World's Largest Lobster Cooker at the annual Maine Lobster Festival, Wallace projects a quality of thought that is uniquely his and a voice as powerful and distinct as any in American letters.

"Wallace can do sad, funny, silly, heartbreaking, and absurd with equal ease; he can even do them all at once." --Michiko Kakutani, New York Times

David Foster Wallace was born in Ithaca, New York, in 1962 and raised in Illinois, where he was a regionally ranked junior tennis player. He received bachelor of arts degrees in philosophy and English from Amherst College and wrote what would become his first novel, The Broom of the System, as his senior English thesis. He received a masters of fine arts from University of Arizona in 1987 and briefly pursued graduate work in philosophy at Harvard University. His second novel, Infinite Jest, was published in 1996.

Wallace taught creative writing at Emerson College, Illinois State University, and Pomona College, and published the story collections Girl with Curious Hair, Brief Interviews with Hideous Men, Oblivion, the essay collections A Supposedly Fun Thing I'll Never Do Again, and Consider the Lobster. He was awarded the MacArthur Fellowship, a Lannan Literary Award, and a Whiting Writers' Award, and was appointed to the Usage Panel for The American Heritage Dictionary of the English Language. He died in 2008. His last novel, The Pale King, was published in 2011.