Against a Dark Background (Paperback) 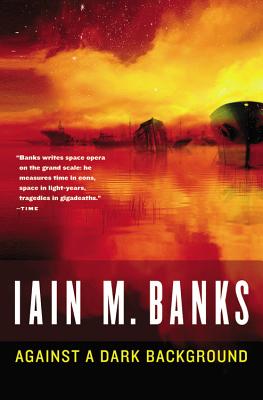 From science fiction master Iain M. Banks comes a standalone adventure of one woman on the run in an isolated galaxy.

Sharrow was once the leader of a personality-attuned combat team in one of the sporadic little commercial wars in the civilization based around the planet Golter. Now she is hunted by the Huhsz, a religious cult which believes that she is the last obstacle before the faith's apotheosis, and her only hope of escape is to find the last of the apocalyptically powerful Lazy Guns before the Huhsz find her.

Her journey through the exotic Golterian system is a destructive and savage odyssey into her past, and that of her family and of the system itself.

"Banks writes space opera on the grand scale: he measures time in eons, space in lightyears, tragedies in gigadeaths."—Time