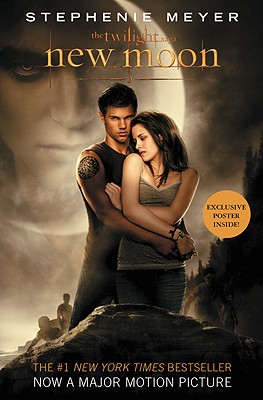 By Stephenie Meyer
$10.99
Possibly out of print. Email or call to check availability and price.

This is book number 2 in the The Twilight Saga series.

With 160 million copies of the Twilight Saga sold worldwide, this addictive love story between a teenage girl and a vampire redefined romance for a generation. For readers hungry for more, here is book two.

For Bella Swan, there is one thing more important than life itself: Edward Cullen. But being in love with a vampire is even more dangerous than Bella could ever have imagined. Edward has already rescued Bella from the clutches of one evil vampire, but now, as their daring relationship threatens all that is near and dear to them, they realize their troubles may be just beginning.

Bella and Edward face a devastating separation, the mysterious appearance of dangerous wolves roaming the forest in Forks, a terrifying threat of revenge from a female vampire and a deliciously sinister encounter with Italy's reigning royal family of vampires, the Volturi.

Passionate, riveting, and full of surprising twists and turns, this vampire love saga is well on its way to literary immortality.

"People do not want to just read Meyer's books; they want to climb inside them and live there."--Time

Stephenie Meyer is the author of the #1 bestselling Twilight Saga, The Host, and The Chemist. Twilight has enraptured millions of readers since its publication in 2005 and has become a modern classic, redefining genres within young adult literature and inspiring a phenomenon that has had readers yearning for more. The series has sold 160 million copies worldwide and was made into five blockbuster feature films. Stephenie lives in Arizona with her husband. Her website is stepheniemeyer.com.

Praise for New Moon:
"Teens will relish this new adventure and hunger for more."--Booklist

"New Moon piles on the suspense and romance." - USA Today

"Vampire afficionados will voraciously consume this mighty tome in one sitting, then flip back and read it once more. It maintains a brisk pace and near-genius balance of breathtaking romance and action."--VOYA

"New Moon will more than feed the bloodthirsty hankerings of fans of the first volume and leave them breathless for the third."--School Library Journal