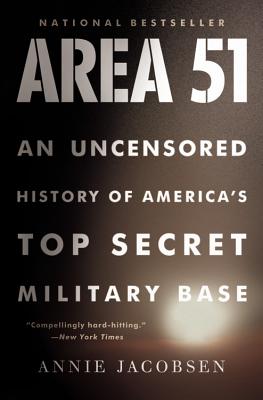 This "compellingly hard-hitting" bestseller from a Pulitzer Prize finalist gives readers the complete untold story of the top-secret military base for the first time (New York Times).

It is the most famous military installation in the world. And it doesn't exist. Located a mere seventy-five miles outside of Las Vegas in Nevada's desert, the base has never been acknowledged by the U.S. government — but Area 51 has captivated imaginations for decades.

Myths and hypotheses about Area 51 have long abounded, thanks to the intense secrecy enveloping it. Some claim it is home to aliens, underground tunnel systems, and nuclear facilities. Others believe that the lunar landing itself was filmed there. The prevalence of these rumors stems from the fact that no credible insider has ever divulged the truth about his time inside the base. Until now.

Annie Jacobsen had exclusive access to nineteen men who served the base proudly and secretly for decades and are now aged 75-92, and unprecedented access to fifty-five additional military and intelligence personnel, scientists, pilots, and engineers linked to the secret base, thirty-two of whom lived and worked there for extended periods. In Area 51, Jacobsen shows us what has really gone on in the Nevada desert, from testing nuclear weapons to building super-secret, supersonic jets to pursuing the War on Terror.

This is the first book based on interviews with eye witnesses to Area 51 history, which makes it the seminal work on the subject. Filled with formerly classified information that has never been accurately decoded for the public, Area 51 weaves the mysterious activities of the top-secret base into a gripping narrative, showing that facts are often more fantastic than fiction, especially when the distinction is almost impossible to make.

Annie Jacobsen is the author of the New York Times bestsellers Area 51 and Operation Paperclip and the Pulitzer Prize finalist The Pentagon's Brain. She was a contributing editor at the Los Angeles Times Magazine. A graduate of Princeton University, she lives in Los Angeles with her husband and two sons.

"Cauldron-stirring. [AREA 51] is not science fiction. It is an assertive account, revelatory ... Ms. Jacobsen has put together a set of strong allegations about Area 51's covert history ... Her research into the world of 'overhead,' the aerial espionage that needed to be developed in extreme secrecy, is compellingly hard-hittting ... the book is noteworthy for its author's dogged devotion to her research."—The New York Times

"A compelling narrative of 50 years of covert operations by the CIA, the U.S. military, and the mysterious "Atomic Energy Commission".... Her meticulous research makes for a fascinating read, as it intersperses the accounts of secret government projects with anecdotes from the people who made those projects happen."—Rachel Larimore, Slate

"An informative history...about the creativity, political acumen and courage of the high-flying Cold Warriors who sought to protect the free world in the decades after World War II."—Andrew Dunn, Bloomberg