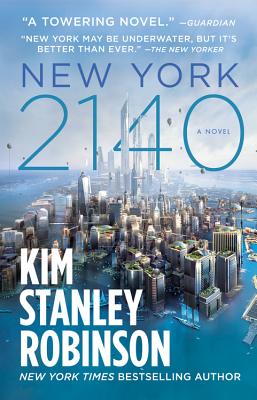 New York Times bestselling author Kim Stanley Robinson returns with a bold and brilliant vision of New York City in the next century.

As the sea levels rose, every street became a canal. Every skyscraper an island. For the residents of one apartment building in Madison Square, however, New York in the year 2140 is far from a drowned city.

There is the market trader, who finds opportunities where others find trouble. There is the detective, whose work will never disappear -- along with the lawyers, of course.

There is the internet star, beloved by millions for her airship adventures, and the building's manager, quietly respected for his attention to detail. Then there are two boys who don't live there, but have no other home -- and who are more important to its future than anyone might imagine.

Lastly there are the coders, temporary residents on the roof, whose disappearance triggers a sequence of events that threatens the existence of all -- and even the long-hidden foundations on which the city rests.

Kim Stanley Robinson is a New York Times bestseller and winner of the Hugo, Nebula, and Locus awards. He is the author of more than twenty books, including the bestselling Mars trilogy and the critically acclaimed Forty Signs of Rain, The Years of Rice and Salt, and 2312. In 2008, he was named a "Hero of the Environment" by Time magazine, and he works with the Sierra Nevada Research Institute. He lives in Davis, California.

"New York may be underwater, but it's better than ever."—The New Yorker

"Science fiction is threaded everywhere through culture nowadays, and it would take an act of critical myopia to miss the fact that Robinson is one of the world's finest working novelists, in any genre. New York 2140 is a towering novel about a genuinely grave threat to civilisation."—Guardian

"Kim Stanley Robinson envisions a future that's closer than we like to think."—NPR Books

"An exploration of human resilience in the face of extreme pressure...starkly beautiful and fundamentally optimistic visions of technological and social change in the face of some of the worst devastation we might bring upon ourselves."— The Conversation

"As much a critique of contemporary capitalism, social mores and timeless human foibles, this energetic, multi-layered narrative is also a model of visionary worldbuilding."—RT Book Reviews (Top Pick!)

"The thriller Robinson unspools in that flooded city is gripping on its own merits. But it's the radical imagination of the book that makes it so hard to put down."—Business Insider

"Robinson has established himself as the great humanist of speculative fiction."—Village Voice

"A thoroughly enjoyable exercise in worldbuilding, written with a cleareyed love for the city's past, present, and future."—Kirkus

"The tale is one of adventure, intrigue, relationships, and market forces.... The individual threads weave together into a complex story well worth the read."

"In this both heartening and dismaying vision of a peri-apocalyptic world, human greed (of course) is the villain, to which the only counteragent is the tenacity and resolve of the human spirit."—Financial Times

"New York 2140 truly is a document of hope as much as dread."—Los Angeles Review of Books

"A rousing tribute to the human spirit."
—San Francisco Chronicle on Aurora

"The thrilling creation of plausible future technology and the grandness of imagination...magnificent."—Sunday Times on Aurora

"[Robinson is] a rare contemporary writer to earn a reputation on par with earlier masters such as Isaac Asimov or Arthur C. Clarke."
—Chicago Tribune on Aurora

"If Interstellar left you wanting more, then this novel might just fill that longing."—io9 on Aurora

"Aurora may well be Robinson's best novel...breaks us out of our well-ingrained, supremely well-rehearsed habits of apocalypse - and lets us see the option of a different future than permanent, hopeless standoff."—Los Angeles Review of Books on Aurora

"Humanity's first trip to another star is incredibly ambitious, impeccably planned and executed on a grand scale in Aurora."—SPACE.com on Aurora

"This ambitious hard SF epic shows Robinson at the top of his game... [A] poignant story, which admirably stretches the limits of human imagination."—Publishers Weekly on Aurora

"This is hard SF the way it's meant to be written: technical, scientific, with big ideas and a fully realized society. Robinson is an acknowledged SF master-his Mars trilogy and his stand-alone novel 2312 (2012) were multiple award winners and nominees-and this latest novel is sure to be a big hit with devoted fans of old-school science fiction."—Booklist on Aurora