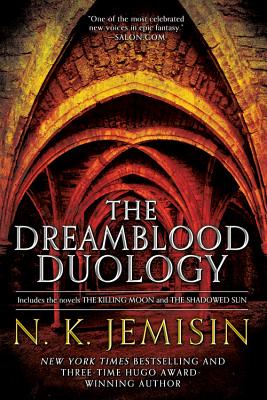 From the NYT bestselling author of The Fifth Season comes a rich, original fantasy about a king gone mad with power in a world where magic is harvested from dreams.

In the ancient city-state of Gujaareh, peace is the only law. Upon its rooftops and amongst the shadows of its cobbled streets wait the Gatherers -- the keepers of this peace. Priests of the dream-goddess, their duty is to harvest the magic of the sleeping mind and use it to heal, soothe . . . and kill those judged corrupt.

But when a conspiracy blooms within Gujaareh's great temple, Ehiru -- the most famous of the city's Gatherers -- must question everything he knows. Someone, or something, is murdering dreamers in the goddess' name, stalking its prey both in Gujaareh's alleys and the realm of dreams. Ehiru must now protect the woman he was sent to kill -- or watch the city be devoured by war and forbidden magic.

The Dreamblood Duology is an omnibus edition that includes The Killing Moon and The Shadowed Sun.

N. K. Jemisin is a Brooklyn author who won the Hugo Award for Best Novel for The Fifth Season, which was also a New York Times Notable Book of 2015. She previously won the Locus Award for her first novel, The Hundred Thousand Kingdoms, and her short fiction and novels have been nominated multiple times for Hugo, World Fantasy, Nebula, and RT Reviewers' Choice awards, and shortlisted for the Crawford and the James Tiptree, Jr. awards. She is a science fiction and fantasy reviewer for the New York Times, and you can find her online at nkjemisin.com.

"[A] gripping series launch... as well as a rousing political and supernatural adventure."—Publishers Weekly (starred review) on The Killing Moon

"Shines for its remarkable characters and graceful prose."—Library Journal on The Killing Moon

"In The Killing Moon, Jemisin displays her usual skill at portraying a world whose contours seem simple at first but which quickly break down into something much more complex and dissonant. The world is so fully fleshed out that I could breathe its spices, while the story and characters are so much a part of the world that you could not pull this story or these people out and plug them into a different setting. Jemisin proves yet again that she is one of the important new writers in the sff scene."—Kate Elliott, author of Black Wolves, on The Killing Moon.

"An engaging and fast-paced read with some truly excellent and complicated world building...an absolutely fascinating read."—RT Book Reviews on The Killing Moon

"Ah N.K. Jemisin, you can do no wrong.... The blend of cultures and lore she draws on to make this very unique world is just stunning, and the fact that she inhabits it with such 3-dimensional characters is even more impressive.... If you want to get away from traditional fantasy world-building, but keep the compelling characters and deep lore, definitely pick this up!!"—Felicia Day on The Killing Moon

"Many books are good, some are great, but few are truly important. Add to this last category The Hundred Thousand Kingdoms, N.K. Jemisin's debut novel...this is the must-read fantasy of the year."—Booklist