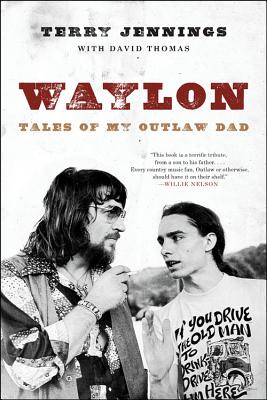 By Terry Jennings, David Thomas (With)
$15.99
Not in stock. Available To Order.

"This book is a terrific tribute, from a son to his father."---Willie Nelson

From the Foreword by Ken Mansfield

"There are many stories about Waylon . . . the family man, the creative genius man, the quiet man, the king-of-the-six-day-roar-man, the uncommon man, the legendary man, the bad-ass man . . . they are all in this book."

In a signed copy of his autobiography, Texas-born country "Outlaw" icon Waylon Jennings penned a personal note to his son Terry: "I did my best. Now it's your turn." Two decades later, Terry Jennings finally completes the true story of his father's remarkable, unvarnished life with Waylon: Tales of My Outlaw Dad.

Born when Waylon was only nineteen, Terry came of age just as Waylon's career hit the stratosphere with hits like "I've Always Been Crazy" and "Good Hearted Woman," one of his famous Willie Nelson duets. Terry dropped out of high school and joined his dad on tour, and the two became more like brothers than father and son. On the road, they toured with legends like Nelson, Johnny Cash, Kris Kristofferson, and Jessi Colter, Waylon's fourth and final wife. Together father and son led a hard-partying lifestyle centered around music, women, and drugs.

Waylon's success--critical acclaim, bestselling albums, sold-out tours, and even TV stardom on The Dukes of Hazzard--was at times eclipsed by his demons, three divorces, crippling debt, and a depression that Terry traces to the premature death of Buddy Holly. (Waylon was supposed to be on Holly and Ritchie Valens's doomed flight.) Through it all, Terry worked on the touring crew, helped manage Waylon's career, and became one of his father's closest confidantes. Debunking myths and sharing incredible never-before-told stories, this book is a son's loving and strikingly honest portrait of his father, "the greatest Outlaw country musician to grace this earth" and an unlikely but devoted family man. Waylon: Tales of My Outlaw Dad will resonate for generations of fans.

Terry Jennings is the CEO and founder of Korban Music Group LLC, a full service management, consulting, and publishing company. Well known for his varied experience at all levels of the music industry, Terry was introduced to the business at an early age through his work as production manager for his father, Waylon Jennings. He has also worked for booking agencies, publishing companies, and as a talent scout for major label companies, including RCA Records. He lives near Waco, Texas.

David Thomas is author/writer of ten books, including the New York Times bestsellers Wrestling for My Life with WWE legend Shawn Michaels and Foxcatcher -- the story that inspired the Oscar-nominated film -- with Olympic gold medal-winner Mark Schultz. He lives near Fort Worth, Texas.

"Waylon: Tales of My Outlaw Dad is a quick, fun read that offers the reader an intimate look inside a world that doesn't exist anymore."—VICE

"In his revealing new book, Waylon Jennings' son Terry discusses his father's legacy and what he really thought of the 'outlaw country' movement."
—Wide Open Country

"Waylon Jennings and I first met in the mid '60s backstage at JD's in Phoenix. We would go on to record duets, write songs, cut records and tour together for over three decades. We had our differences, but our friendship always endured. I considered Waylon one of my best friends. Packed with funny, insightful tales of life on the road, this book is a terrific tribute, from a son to his father. A father who happens to be one of Texas and Nashville's greatest musicians. Every country music fan, Outlaw or otherwise, should have it on their shelf."
—Willie Nelson

"I'm so excited about Terry's new book. Waylon Jennings has always been one of my favorite singers of all time. I loved his voice. He was completely different from anybody else. And I always wanted to either do a whole album with him or at least a duet song; but I never got the chance. That will always be one of my great regrets. Waylon was a wonderful human being as well. He reminded me very much of my own people in his tenderness, kindness, his understanding and his personality. I think of him often."
—Dolly Parton

"I've played country music my whole life, and it's the evolutions (sometimes revolutions) that have ensured that it stays ever changing, ever growing, and constantly relevant. When I first heard Waylon sing the opening verse of 'Are You Sure Hank Done It This Way' it was like a mini sermon. It's also the first country song I played for my wife, and she was hooked immediately. As his son Terry wonderfully captures in this book, Waylon was an outsider trying to figure out how to be in a town like Nashville and stay true to his music and who he is. And, boy, can I relate to that. Waylon had a power, a gravitas to his music that hit me in a religious way. It was music where I could smell the beer soaked carpet, see the neon, feel the stomping and sliding of boots on hardwood floors, and almost taste the air thick with smoke, sex and whiskey. It's authentic, it's raw, and it's unapologetic in every way...and for a kid growing up on the other side of the world who never got to see Waylon 'live' or meet him, I feel like I've done both. God bless you Waylon ... and please know I'm taking great care of your leather-bound 1950 Broadcaster."
—Keith Urban