The Queens of Animation: The Untold Story of the Women Who Transformed the World of Disney and Made Cinematic History (Hardcover) 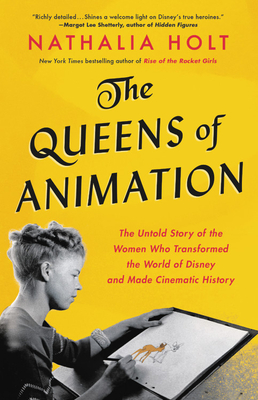 From Snow White to Moana, from Pinocchio to Frozen, the animated films of Walt Disney Studios have moved and entertained millions. But few fans know that behind these groundbreaking features was an incredibly influential group of women who fought for respect in an often ruthless male-dominated industry and who have slipped under the radar for decades.

In The Queens of Animation, bestselling author Nathalia Holt tells their dramatic stories for the first time, showing how these women infiltrated the boys' club of Disney's story and animation departments and used early technologies to create the rich artwork and unforgettable narratives that have become part of the American canon. As the influence of Walt Disney Studios grew -- and while battling sexism, domestic abuse, and workplace intimidation -- these women also fought to transform the way female characters are depicted to young audiences.

With gripping storytelling, and based on extensive interviews and exclusive access to archival and personal documents, The Queens of Animation reveals the vital contributions these women made to Disney's Golden Age and their continued impact on animated filmmaking, culminating in the record-shattering Frozen, Disney's first female-directed full-length feature film.

Nathalia Holt, Ph.D. is the New York Times bestselling author of Rise of the Rocket Girls: The Women Who Propelled Us, from Missiles to the Moon to Mars and Cured: The People who Defeated HIV. Her writing has appeared in numerous publications including the New York Times, the Los Angeles Times, The Atlantic, Slate, Popular Science, and Time. She is a former Fellow at the Ragon Institute of Massachusetts General Hospital, MIT, and Harvard University. She lives with her husband and their two daughters in Pacific Grove, California.

"Nathalia Holt's richly detailed group biographyshines a welcome light on Disney's true heroines--not the princesses on the screen, but the talented female artists and writers working hard behind the scenes.The Queens of Animation is also a crisp reflection on Hollywood's charged and changing relationship with beauty, race and fame."—Margot Lee Shetterly, New York Times bestselling author of Hidden Figures

"Nathalia Holt has a deeper, more important motive for revisiting classics...Marshaling scrupulous research, the author makes the case for the role played by female studio employees in bringing to life those classic films...This book scores for telling us something new about the films we thought we knew so well."—Peter Tonguette, Wall Street Journal

"A gripping corrective...Nathalia Holt ushers these
animators and story developers into the limelight...Few know of the company's
female virtuosi, who from the 1930s on injected nuance into characters from
Bambi to a panoply of princesses."—Barbara Kiser, Nature

"Sprightly...Holt,
a science journalist and a popular historian, introduces us to a handful of
women who worked on some of the classic Disney Studios films, spins them around,
sprinkles some pixie dust, and has them take a bow."—Margaret Talbot, The New Yorker

"Holt's
dedication to telling these women's stories after they've been lost--and nearly
forgotten--for so long is palpable, narrating their personal histories as if the
animators were characters themselves...And if it weren't for this book, their
work might have gone ignored and overlooked forever."—Rachel King, Fortune

"Readers who loved Nathalia Holt's Rise of the Rocket Girls will find so much to enjoy in this deeply researched, loving celebration of Disney's long-overlooked female pioneers. Holt evocatively blends social history, technological advances and the personal livesof these forgotten artists to champion their achievements and their extraordinary legacy."—Kate Moore, New York Times bestselling author of The Radium Girls

"Marvelous...The Queens of Animation grips from the first page...As Holt shows so masterfully, the bright colors and curved lines that become those fairy tale figures are the results of realwomen's brains, strength, and passion."—Mary Gabriel, author of Ninth Street Women

"Disney's
female artists and writers have finally been receiving long overdue
recognition. Holt's heartfelt, deeply researched tome, however, is the first to
truly highlight the sexism they experienced at the studio."—Biz Hyzy, Booklist (starred review)

"Disney fans will go wild over The Queens of Animation... Nathalia Holt digs deep and exposes some of the talented women who finally get some recognition."—Sophie Matthews, Women.com

"This is one you don't want to miss--and won't want to put down. Holt brings her empathy, smart writing, and knack for research to the story of another group of extraordinary, unsung women heroes."—Brian Jay Jones,author of Becoming Dr. Seuss and George Lucas: A Life

"Think of this book as if Hidden Figures were about Walt Disney Studios instead of NASA. The Queens of Animation pulls back the curtain on a handful of influential, and largely under-recognized, women writers and animators who helped shape the early aesthetic of Disney during a time when the industry was largely a boy's club...Holt goes from Snow White up to Frozen in this essential read ahead of the launch of Disney+ this fall."—Jeva Lange, The Week, 25 Books to Read in the Second Half of 2019

"The Queens of Animation draws on the revealing and engagingly personal stories of many talented women who had a hand in the creation of the animated Disney films we all love--a long overdue recognition for their contributions. It's time to resuscitate and honor all that women have clandestinely molded and shaped."—Kara Cooney, author of When Women Ruled the World

"A riveting and essential read about the women who helped create many of the most famous Walt Disney films. Like Hidden Figures and Rise of the Rocket Girls, The Queens of Animation tells us a story we need to hear, one that was lost to history until now."—Charlotte Gordon, author of Romantic Outlaws

"Engrossing...While restoring these women to their rightful place in history, Holt also covers the evolution of Disney's animated features, such as how the studio continually integrated new technological innovations, including the multiplane camera, stop-motion animation, Technicolor, and many others. Going up to the present to highlight how women have continued to play key roles in making films like Brave and Frozen, Holt's thorough and enchanting account will be a must-read for Disney enthusiasts and champions of women's artistic contributions."—Publishers Weekly