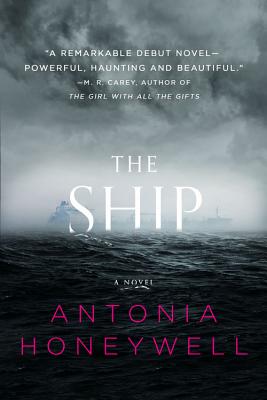 By Antonia Honeywell
$26.00
Possibly out of print. Email or call to check availability and price.

In this thought-provoking and lyrical debut novel, a young woman's only hope for survival in the dystopian future is a ship, a Noah's Ark, that can rescue 500 people.

London burned for three weeks. And then it got worse. . .

Young, naive, and frustratingly sheltered, Lalla has grown up in near-isolation in her parents' apartment, sheltered from the chaos of their collapsed civilization. But things are getting more dangerous outside. People are killing each other for husks of bread, and the police are detaining anyone without an identification card. On her sixteenth birthday, Lalla's father decides it's time to use their escape route -- a ship he's built that is only big enough to save five hundred people.

But the utopia her father has created isn't everything it appears. There's more food than anyone can eat, but nothing grows; more clothes than anyone can wear, but no way to mend them; and no-one can tell her where they are going.

Antonia Honeywell studied English at Manchester University and worked at the Natural History and Victoria and Albert Museums in London, running creative writing workshops and education programmes for children, before training as a teacher. During her ten years teaching English, drama and film studies, she wrote a musical, and a play which was performed at the Edinburgh Festival. She has four young children and lives in Buckinghamshire. The Ship is her first novel.

"A remarkable debut novel - powerful, haunting, and beautiful."
—M. R. Carey, author of The Girl With All the Gifts

"Thoughtful and luminous . . . [A] powerful debut novel . . . it's a provocative novel with difficult questions about the fundamental nature how people choose to live their lives."—Los Angeles Times on The Ship

"Honeywell's lyrical descriptions of Lalla's thoughts and the ship itself are haunting . . . . will appeal to lovers of psychological speculative fiction."—Publishers Weekly

"Honeywell's dystopian coming-of-age tale is challenging and intense...A solid YA crossover"—Library Journal on The Ship

"Honeywell's assured debut is an exercise in noose-tightening tension and lyrical prose."—Barnes and Noble Science Fiction and Fantasy Blog

"As engrossing as it is chilling, this potent first novel fuses an apocalyptic coming of age story with a fierce interrogation of what it means to be truly alive."
—Daily Mail

"The Ship is tense, engaging and emotionally charged: I devoured this novel."
—Helen Dunmore, author of The Lie

"Honeywell's debut is ambitious and well written and provides endless possibilities for debate."
—The Guardian

"The Hunger Games meets the London riots on board Noah's Ark 20 years from now, but don't underestimate its originality. Read it and be challenged."
—The Times (UK)

"An ambitious debut that takes the tale of the Ark and updates it for a world bedeviled by global warming... will send shivers up your spine."
—Harper's Bazaar

"This is a must read for all Dystopian and Post-Apocalyptic fans. It is a pleasant change from the typical novels in the genre."—YA Books Central