The Hunger of the Gods (The Bloodsworn Trilogy #2) (Paperback) 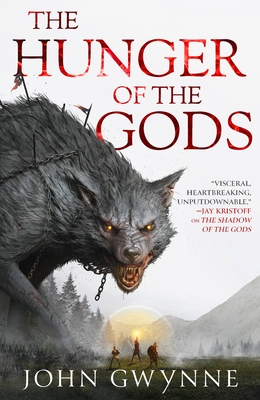 This is book number 2 in the The Bloodsworn Trilogy series.

THE DEAD GODS ARE RISING.

Lik-Rifa, the dragon god of legend, has been freed from her eternal prison. Now she plots a new age of blood and conquest.

As Orka continues the hunt for her missing son, the Bloodsworn sweep south in a desperate race to save one of their own–and Varg takes the first steps on the path of vengeance.

Elvar has sworn to fulfil her blood oath and rescue a prisoner from the clutches of Lik-Rifa and her dragonborn followers, but first she must persuade the Battle-Grim to follow her. Yet even the might of the Bloodsworn and Battle-Grim cannot stand alone against a dragon god.

Their only hope lies within the mad writings of a chained god. A book of forbidden magic with the power to raise the wolf god Ulfrir from the dead...and bring about a battle that will shake the foundations of the earth.

Praise for The Shadow of the Gods

“There is not a dull chapter in this fantasy epic.” —Vulture (Best of the Year)

"A satisfying and riveting read. It’s everything I’ve come to expect from a John Gwynne book." —Robin Hobb

"A masterclass in storytelling . . . epic, gritty fantasy with an uncompromising amount of heart." —FanFiAddict

For more from John Gwynne, check out:

The Faithful and the Fallen
Malice
Valor
Ruin
Wrath

John Gwynne studied and lectured at Brighton University. He’s played double bass in a rock ’n’ roll band and traveled the USA and Canada. He is married with four children and lives in Eastbourne, where he is part of a Viking reenactment group. When not writing, he can often be found standing in a shield wall with his three sons about him. His dogs think he is their slave.

"A satisfying and riveting read. The well-realized characters move against a backdrop of a world stunning in its immensity. It’s everything I’ve come to expect from a John Gwynne book."—Robin Hobb on The Shadow of the Gods

"The world is wonderfully rendered with attention paid to what makes the Norse sagas entertaining….The many layers provide a lavish feast for any reader. A great companion to Neil Gaiman’s Norse Mythology."—Booklist (starred review) on The Shadow of the Gods

"There is not a dull chapter in this fantasy epic. As tension mounts with each passing page, Gwynne delivers exhilarating fights and gruesome battles with such vivid prose the choreography jumps off the page."—Vulture (Best of the Year) on The Shadow of the Gods

"A masterfully crafted, brutally compelling Norse-inspired epic."—Anthony Ryan on The Shadow of the Gods

"Gwynne, a Viking reenactor, puts in the work, with fine historical details that make the story come to life. Fans of the era will be delighted with the accuracy. This is a duly exciting start to the series."—Publishers Weekly on The Shadow of the Gods

“Visceral, heart-breaking and unputdownable.”—Jay Kristoff on The Shadow of the Gods

"A masterclass in storytelling . . . epic, gritty fantasy with an uncompromising amount of heart."—FanFiAddict on The Shadow of the Gods