The Litigators: A Novel (Paperback) 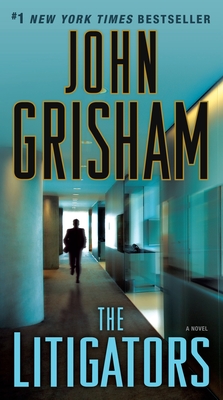 By John Grisham
$9.99
Possibly out of print. Email or call to check availability and price.

#1 NEW YORK TIMES BESTSELLER • After leaving a fast-track legal career and going on a serious bender, David Zinc is sober, unemployed, and desperate enough to take a job at Finley & Figg, a self-described “boutique law firm” that is anything but.

Oscar Finley and Wally Figg are in fact just two ambulance chasers who bicker like an old married couple. But now the firm is ready to tackle a case that could make the partners rich—without requiring them to actually practice much law. A class action suit has been brought against Varrick Labs, a pharmaceutical giant with annual sales of $25 billion, alleging that Krayoxx, its most popular drug, causes heart attacks. Wally smells money. All Finley & Figg has to do is find a handful of Krayoxx users to join the suit. It almost seems too good to be true ... and it is.

John Grisham is the author of forty-seven consecutive #1 bestsellers, which have been translated into nearly fifty languages. His recent books include The Judge's List, Sooley, and his third Jake Brigance novel, A Time for Mercy, which is being developed by HBO as a limited series.

Grisham is a two-time winner of the Harper Lee Prize for Legal Fiction and was honored with the Library of Congress Creative Achievement Award for Fiction.

When he's not writing, Grisham serves on the board of directors of the Innocence Project and of Centurion Ministries, two national organizations dedicated to exonerating those who have been wrongfully convicted. Much of his fiction explores deep-seated problems in our criminal justice system.

John lives on a farm in central Virginia.

“John Grisham is about as good a storyteller as we’ve got.”—The New York Times Book Review

“Grisham holds up that same mirror to our age as Tom Wolfe’s The Bonfire of the Vanities.”—The Boston Globe