My Last Sigh: The Autobiography of Luis Bunuel (Paperback) 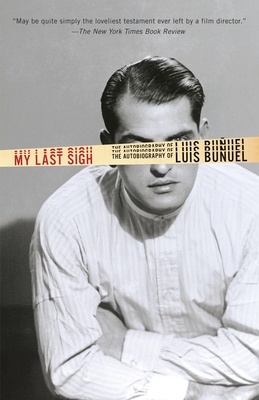 A provocative memoir from Luis Buñuel, the Academy Award winning creator of some of modern cinema's most important films, from Un Chien Andalou to The Discreet Charm of the Bourgeoisie.

Luis Buñuel’s films have the power to shock, inspire, and reinvent our world. Now, in a memoir that carries all the surrealism and subversion of his cinema, Buñuel turns his artistic gaze inward. In swift and generous prose, Buñuel traces the surprising contours of his life, from the Good Friday drumbeats of his childhood to the dreams that inspired his most famous films to his turbulent friendships with Federico García Lorca and Salvador Dalí. His personal narratives also encompass the pressing political issues of his time, many of which still haunt us today—the specter of fascism, the culture wars, the nuclear bomb. Filled with film trivia, framed by Buñuel’s intellect and wit, this is essential reading for fans of cinema and for anyone who has ever wanted to see the world through a surrealist’s eyes.

Luis Buñuel (1900–1983) was one of the twentieth century’s greatest filmmakers. His many credits include Un Chien Andalou (1924), which he conceived with Salvador Dalí, and The Discreet Charm of the Bourgeoisie (1972), which won the Academy Award for Best Foreign Film.

"May be quite simply the loveliest testament ever left by a film director." —The New York Times Book Review

"One of the best books ever offered by a moviemaker. Buñuel is the proper human landmark for a moment when Europe met America and the schemes of religion, property, and progress were reassessed as dreams." —The New Republic