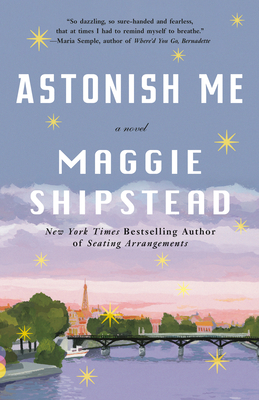 From the bestselling author of Great Circle—for years Joan has been trying to forget her past, to find peace and satisfaction in her role as wife and mother. Few in her drowsy California suburb know her thrilling history: as a young American ballerina in Paris, she fell into a doomed, passionate romance with Soviet dance superstar Arslan Rusakov.

After playing a leading role in his celebrated defection, Joan bowed out of the spotlight for good, heartbroken by Arslan and humbled by her own modest career. But when her son turns out to be a ballet prodigy, Joan is pulled back into a world she thought she'd left behind—a world of dangerous secrets, of Arslan, and of longing for what will always be just out of reach.

Maggie Shipstead is a graduate of the Iowa Writers’ Workshop and a former Wallace Stegner Fellow at Stanford University. Her first novel, Seating Arrangements, was a New York Times best seller, a finalist for the Flaherty-Dunnan First Novel Prize, and the winner of the Dylan Thomas Prize and the Los Angeles Times Book Prize for First Fiction.

“So dazzling, so sure-handed and fearless, that at times I had to remind myself to breathe.” —Maria Semple, author of Where’d You Go, Bernadette

“A novel you must read.” —Ron Charles, The Washington Post

“I will be paying close attention to Shipstead’s career from here on in.” —Jeffrey Eugenides

“A breathtaking work of art.” —O, The Oprah Magazine

“A grand arabesque into the world of dance. . . . Thrilling.” —Time

“The inner lives of [Shipstead’s] characters feel as real and immediate as the shifting settings they inhabit: still-gritty mid-1970s Manhattan, shabbily elegant Paris, the sunbaked suburban sprawl of Southern California. . . . Shipstead’s youth may be a talking point, but her talent transcends it. She’s astonishing.” —Entertainment Weekly

“Seamless and full of small elegances . . . Lovely. . . . Reading Astonish Me, I didn’t need to be astonished. I was happy.” —Annalisa Quinn, NPR

“A searing rumination on insecurity, secrecy, and friendship. . . . Shipstead nails the details of being perpetually en pointe” —O, The Oprah Magazine

“Maggie Shipstead takes hold of the reader and doesn’t let go. Astonish Me is a haunting, powerful novel.” —Dani Shapiro

“Deeply engrossing . . . [A] thoughtful meditation on the relentless pursuit of perfection and just how far we’re willing to go for love.” —BookPage

“A bravura display of high-performance art, the only constant its quest for perfection.”  —The Guardian (London)

“The emotionally nuanced tale of barre-crossed lovers and the majestic, mysterious world of professional dance. A supple, daring, and vivid portrait of desire and betrayal.” —Booklist (starred review)

“Bold and thrilling. . . The way the characters come together in new and surprising pairings is one of the book’s many pleasures.” —Boston Globe

“Full of delights. . . . Maggie Shipstead is a writer to watch.” —The Washington Times

“Sharp and memorable . . . Full of the kind of keen observations about people and relationships that made her first book, Seating Arrangements, one of 2012’s most delightful literary surprises.” —San Diego Union-Tribune

“Spans continents, decades, and generations . . . . A total pleasure to read.”  —The Rumpus