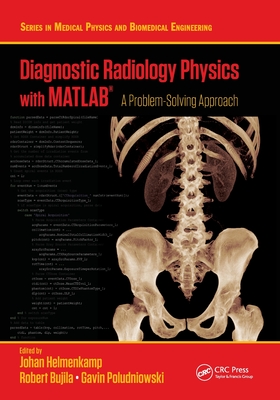 Imaging modalities in radiology produce ever-increasing amounts of data which need to be displayed, optimized, analyzed and archived: a big data as well as an image processing problem. Computer programming skills are rarely emphasized during the education and training of medical physicists, meaning that many individuals enter the workplace without the ability to efficiently solve many real-world clinical problems.

This book provides a foundation for the teaching and learning of programming for medical physicists and other professions in the field of Radiology and offers valuable content for novices and more experienced readers alike.

It focuses on providing readers with practical skills on how to implement MATLAB(R) as an everyday tool, rather than on solving academic and abstract physics problems. Further, it recognizes that MATLAB is only one tool in a medical physicist's toolkit and shows how it can be used as the glue to integrate other software and processes together. Yet, with great power comes great responsibility. The pitfalls to deploying your own software in a clinical environment are also clearly explained. This book is an ideal companion for all medical physicists and medical professionals looking to learn how to utilize MATLAB in their work.

Encompasses a wide range of medical physics applications in diagnostic and interventional radiology Advances the skill of the reader by taking them through real-world practical examples and solutions with access to an online resource of example code The diverse examples of varying difficulty make the book suitable for readers from a variety of backgrounds and with different levels of programming experience.

Johan Helmenkamp, M.Sc. Johan obtained his Master's degree in Medical Radiation Physics at Lund University (Sweden) in 2010. Johan is a practising medical physics expert in Radiology at the Karolinska University Hospital (Sweden) and teaches undergraduate medical physics students, radiology residents and radiographers in topics such as imaging physics and technology, image processing and radiation safety. Johan has chaired a course committee for a national programming course aimed at improving the programming skills of fellow medical physicists and finds MATLAB programming a necessity both as a teaching tool but also for his everyday physics practice in the clinic, where there is a high demand for accurate and well-presented data for decision making.Robert Bujila, Ph.D. Robert earned his Master's degree in Medical Radiation Physics at Stockholm University (Sweden) in 2010. After receiving his Master's degree in Medical Physics, Robert worked at the Karolinska University Hospital between 2010 and 2019 with a focus on Computed Tomography. While working as a clinical Medical Physicist, Robert received his PhD in Physics from the Royal Institute of Technology in Stockholm, Sweden with a project related to the optimization of image quality and radiation dose in CT. From the beginning of Robert's career, he has been involved in many projects that require programming where MATLAB has been an essential tool. As such, Robert understands the potential that good programming skills can provide and has been an advocate for the increased utilization of programming to forward the Medical Physics profession. During the course of editing this book, Robert has moved on from the Karolinska University Hospital to take an active role in the development of Computed Tomography systems in the private sector.Gavin Poludniowski, Ph.D. Gavin Poludniowski graduated with a PhD in Theoretical Physics from the University of Manchester (UK) in 2003. He gained his Master's degree in Medical Physics the next year from the University of Leeds, before completing the Basic Clinical Training scheme at the Regional Medical Physics Department in the North East of England. After research stints at the Royal Marsden Hospital and the University of Surrey, he moved to Sweden, where he is currently employed at the Karolinska University Hospital. Gavin has had a varied career, but for a long time a strong focus has been on research in medical imaging. His software such as SpekCalc and SpekPy have proved popular and have been used in many hospitals and research institutions around the world. He first used MATLAB before Y2K and still makes use of it in his work today. Gavin has also contributed previously to a book published by CRC Press (Handbook of X-ray Imaging: Physics and Technology edited by Paolo Russo).