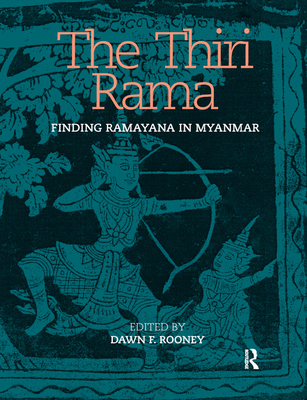 By Dawn F. Rooney (Editor)
Email or call for price

The Thiri Rama - or the Great Rama - was written for court performance and is the only known illustrated version of the Ramayana story in Myanmar. Based on palm-leaf manuscripts and scenes carved on over 300 sandstone plaques at a mid-nineteenth-century Buddhist pagoda west of Mandalay in Myanmar, this book presents an original translation of the Thiri Rama rendered in prose.

The volume also includes essays on the history and tradition of the Ramayana in Myanmar as well as the cultural context in which the play was performed. It contains many helpful resources, incorporating a glossary and a list of characters and their corresponding personae in Valmiki's Ramayana.

With over 250 fascinating visuals and core text contributions by distinguished Burmese scholars, U Thaw Kaung, Tin Maung Kyi, and U Aung Thwin, this book will greatly interest scholars and researchers of South and Southeast Asian culture, literary forms, epics, art and art history, theatre and performance studies, religion, especially those concerned with Hinduism, as well as folklorists.

Dawn F. Rooney is an art historian specializing in Southeast Asian culture. She is the author of eleven books on the subject, ranging from guides to Angkor (Cambodia) and Sukhothai (Thailand) to ceramics of the region and Thai Buddhist art. She was a scholar-in-residence at the Rockefeller Foundation Study Center, Bellagio, Italy, and is Advisor to the Society for Asian Art at the Asian Art Museum, San Francisco, lecturer at the Southeast Asia module of the post-diploma course at SOAS, University of London, and part of the editorial board of the Oriental Society of Australia.