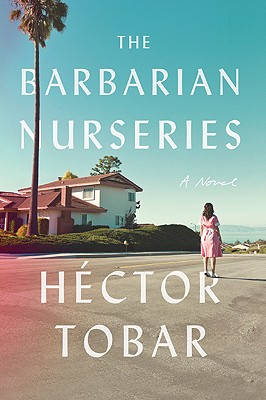 By Héctor Tobar
$27.00
Possibly out of print. Email or call to check availability and price.

A New York Times Notable Book for 2011 A Boston Globe Best Fiction Book of 2011 The great panoramic social novel that Los Angeles deserves—a twenty-first century, West Coast Bonfire of the Vanities by the only writer qualified to capture the city in all its glory and complexity

With The Barbarian Nurseries, Héctor Tobar gives our most misunderstood metropolis its great contemporary novel, taking us beyond the glimmer of Hollywood and deeper than camera-ready crime stories to reveal Southern California life as it really is, across its vast, sunshiny sprawl of classes, languages, dreams, and ambitions.

Araceli is the live-in maid in the Torres-Thompson household—one of three Mexican employees in a Spanish-style house with lovely views of the Pacific. She has been responsible strictly for the cooking and cleaning, but the recession has hit, and suddenly Araceli is the last Mexican standing—unless you count Scott Torres, though you’d never suspect he was half Mexican but for his last name and an old family photo with central L.A. in the background. The financial pressure is causing the kind of fights that even Araceli knows the children shouldn’t hear, and then one morning, after a particularly dramatic fight, Araceli wakes to an empty house—except for the two Torres-Thompson boys, little aliens she’s never had to interact with before. Their parents are unreachable, and the only family member she knows of is Señor Torres, the subject of that old family photo. So she does the only thing she can think of and heads to the bus stop to seek out their grandfather. It will be an adventure, she tells the boys. If she only knew . . .

With a precise eye for the telling detail and an unerring way with character, soaring brilliantly and seamlessly among a panorama of viewpoints, Tobar calls on all of his experience—as a novelist, a father, a journalist, a son of Guatemalan immigrants, and a native Angeleno—to deliver a novel as broad, as essential, as alive as the city itself.

Hector Tobar, now a weekly columnist for the "Los Angeles Times," ""is a Pulitzer Prize-winning journalist and a novelist. He is the author of "Translation Nation "and "The Tattooed Soldier. "The son of Guatemalan immigrants, he is a native of the city of Los Angeles, where he lives with his wife and three children.

“The Barbarian Nurseries is a book of extraordinary scope and extraordinary power. Héctor Tobar's second novel sweeps its central character from almost-serfdom and sends her on an odyssey through the teeming mysteries of Los Angeles and the wild jungles of the California judicial system . . . Tobar, a Los Angeles Times columnist, moves nimbly in and out of the minds of a host of characters, viewing even those who seem on the surface the least sympathetic with an awed authorial tenderness. The chief surprise of The Barbarian Nurseries is that, despite the social and ethnic schisms it so acutely explores, it turns out to be such a warm novel.” —Los Angeles Times

“The Barbarian Nurseries is a dark, poignant and hilarious tale of a family maid in Southern California who tries to hold things together as a marriage falls apart . . . That Tobar is so evenhanded, so compassionate, so downright smart, should place his new novel on everyone's must-read list.” —The Seattle Times

“The Barbarian Nurseries, in stylistic homage to Charles Dickens, Tom Wolfe and T. C. Boyle, paints a rich Panavision place and time as sprawling and paradoxical as its subject . . . Tobar has crafted an illuminating parable for this historical moment, and an entertaining one, and provided a social mirror within which are faces we need to understand, and face.” —The Buffalo News

"Héctor Tobar’s The Barbarian Nurseries is that rare novel that redefines a city. It has the necessary vital sweep of culture and class that brings a city to life, but its power lies in Tobar's ability to persuasively change the perspective from which the Los Angeles of the present—and, by extension, the United States—is seen. This book confirms the promise of Tobar's debut novel, The Tattooed Soldier.” —Stuart Dybek, author of I Sailed with Magellan and The Coast of Chicago

"The Barbarian Nurseries is a huge novel of this century, as sprawling and exciting as Los Angeles itself, one that tracks a Mexican immigrant maid not only as static decor in 'real' America's economic rise and fall. Like yard workers and cooks, construction laborers and seamstresses, Tobar's Araceli has flesh, brains, dreams, ambition, history, culture, voice: a rich, generous life. A story that was demanded, we can celebrate that it is now here." —Dagoberto Gilb, author of Before the End, After the Beginning and The Flowers

"Héctor Tobar's novel is astonishing, like a many-layered mural on a long wall in Los Angeles, a tapestry of people and neighborhoods and stories. A vivid testament to Southern California as the world. Araceli is so unexpected and unique; she's a character America needs to see, and this novel takes her on a journey America needs to understand." —Susan Straight, author of Highwire Moon

"Tobar delivers a riveting, insightful morality tale of conspicuously consuming Americans and their Mexican servants in the O.C. . . . Tobar is both inventive and relentless in pricking the pretentious social consciences of his entitled Americans, though he also casts a sober look on the foibles of the Mexicans who serve them. His sharp eye for Southern California culture, spiraling plot twists, ecological awareness, and ample willingness to dole out come-uppance to the nauseatingly privileged may put readers in mind of T. C. Boyle." —Publishers Weekly“Tobar, a veteran city reporter in Los Angeles, weaves an intricate urban tale animated by a creative, savvy protagonist.” —The New Yorker  “The strength of this book is to be found in its sympathetic portrayals of people who struggle to find a common language yet persist in misunderstanding one another . . . Tobar’s portraits, acute and humane, render his characters intelligible. His illuminations become our recognitions.” —Rebecca Donner, New York Times Book Review     “[R]iveting . . . a ripping novel—and a proper adventure yarn—about power and identity in 21st century California.” —Theo Schell-Lambert, San Francisco Chronicle    “This is a novel about Los Angeles, and maybe the finest we’ll see for many years. It is also a novel that triumphantly transcends geography and delivers a stirring look at the borders of our expectations, both great and small.” —Tod Goldberg, Los Angeles Review of Books   “If Hector Tobar turns out to be the Charles Dickens or the Tom Wolfe of the 21st century, he owes a big thank-you to the people of California . . . Yuppies, immigrants, politicians and vigilantes—Tobar has them all coming together in a Crash-like moment for a perfect California ending that will leave readers pondering the inconsistencies in the country’s dependence on illegal immigrants even as some of us persist in keeping them at arm’s length.” —Karen Grigsby Bates, Morning Edition “The Barbarian Nurseries is a grand, amusing read, a mad and sprawling city's less-mad but still sprawling apologia.” —Alan Scherstuhl, SF Weekly   “A cross-cultural gem.” —Rebecca Adler-Warren, More