Night Wraps the Sky: Writings by and about Mayakovsky (Hardcover) 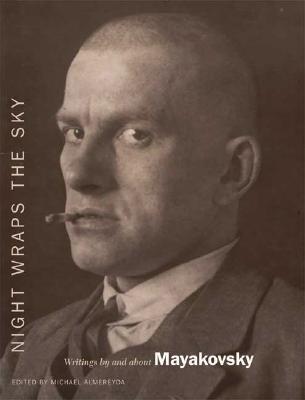 From the time his first, futurist poems were published in 1912 until his suicide at the age of thirty-six, Vladimir Mayakovsky made theatrical appearances in his written work and perfected an iconoclastic voice James Schuyler called "the intimate yell." As the poet laureate of the Russian Revolution, Mayakovsky led a generation that staked everything on the notion that an artist could fuse a public and a private self. But by the time of Stalin's terror, the contradictions of the revolution caught up with him, and he ended in despair.

A major influence on American poets of the twentieth century, Mayakovsky's work remains fascinating and urgent. Very few English translations have come close to capturing his lyric intensity, and a comprehensive volume of his writings has not been published in the past thirty years. In "Night Wraps the Sky," the acclaimed filmmaker Michael Almereyda ("Hamlet," "William Eggleston in the Real World") presents Mayakovsky's key poems translated by a new generation of Russian-American poets alongside memoirs, artistic appreciations, and eyewitness accounts, written and pictorial, to create a full-length portrait of the man and the mythic era he came to embody.

Michael Almereyda's films include "Nadja," "Hamlet," "William Eggleston in the Real World," and "New Orleans Mon Amour." His writing has appeared in "The New York Times," "Artforum," "The Believer," and "Film Comment."

"Allen Ginsberg admired the epic sweep and social ambition of Mayakovsky's poetry, while Frank O'Hara was fascinated by Mayakovsky's unabashed intimacy with the cosmos. The barbaric-bardic energy and influence of the Russian Futurist giant have been obscured for half a century, but Michael Almereyda has recovered a living, still-breathing figure of folk majesty, a poet-declaimer whose discoveries are far from spent." —Andrei Codrescu

"The poet Mayakovsky may have been a genius, a hipster, a shill, and the first and only early-Soviet rap star. NIGHT WRAPS THE SKY finally does justice to one of the most fascinating and controversial literary bad boys of the 20th Century." —Gary Shteyngart

“Mayakovsky read like a sailor shouting through a megaphone to another ship in a heavy sea.” —John Berger