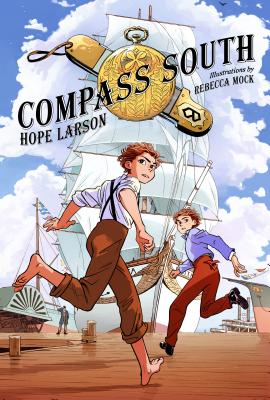 By Hope Larson, Rebecca Mock (Illustrator)
$18.99
Possibly out of print. Email or call to check availability and price.

This is book number 1 in the Four Points series.

It's 1860 in New York City. When 12-year-old twins Alexander and Cleopatra's father disappears, they join the Black Hook Gang and are caught by the police pulling off a heist. They agree to reveal the identity of the gang in exchange for tickets to New Orleans. But once there, Alex is shanghaied to work on a ship that is heading for San Francisco via Cape Horn. Cleo stows away on a steamer to New Granada where she hopes to catch a train to San Francisco to find her brother. Neither Alexander nor Cleo realizes the real danger they are in-they are being followed by pirates who think they hold the key to treasure. How they outwit the pirates and find each other makes for a fast-paced, breathtaking adventure.
A Margaret Ferguson Book

Hope Larson is the author of All Summer Long, which was a Kirkus Reviews Best Book of 2018 and an Eisner Award Nominee, as well as the recently published sequel, All Together Now. She also adapted and illustrated A Wrinkle in Time: The Graphic Novel, which spent forty-four weeks on the New York Times bestseller list and for which she won an Eisner Award. She is additionally the author and illustrator of Salamander Dream, Gray Horses, Chiggers, and Mercury, and the author of Compass South and Knife's Edge, both illustrated by Rebecca Mock. She lives in North Carolina.

Rebecca Mock is an illustrator and comics artist. She illustrated the graphic novels Compass South and Knife's Edge, both written by Hope Larson. Her work has also appeared in various publications, including the New York Times and the New Yorker. She is co-organizer of the Hana Doki Kira anthology.

“Larson’s (Who Is AC?) concoction of tried-and-true adventure elements—stowaways, pirate raids, jungle tribes—hangs together convincingly, and scene-stealers such as Tarboro, a free black man who’s a brilliant swordsman and the story’s true hero, provide moral ballast. Illustrator Mock, making her debut, adeptly captures the changing relationships between the twins—especially the gender-bending awkwardness that accompanies Cleo’s stint as a boy. A sequel is promised.” —Publishers Weekly

“This graphic novel series-opener captures all the rollicking action of a Robert Louis Stevenson sea adventure—with the welcome additions of a capable female protagonist and several fully realized secondary characters of color. A variety of panel sizes keeps the pace brisk while allowing for the occasional pause to set the scene or linger in an emotional moment. Plenty of tantalizing questions remain, setting up another exciting adventure.” —The Horn Book