Claiming My Place: Coming of Age in the Shadow of the Holocaust (Hardcover) 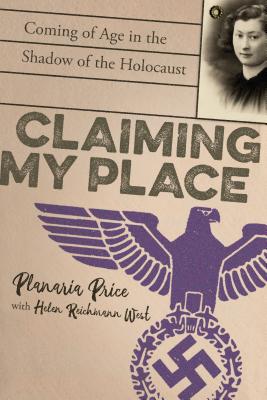 By Planaria Price, Helen Reichmann West
$17.99
Possibly out of print. Email or call to check availability and price.

Meet Barbara Reichmann, once known as Gucia Gomolinska: smart, determined, independent, and steadfast in the face of injustice. A Jew growing up in predominantly Catholic Poland during the 1920s and ’30s, Gucia studies hard, makes friends, falls in love, and dreams of a bright future. Her world is turned upside down when Nazis invade Poland and establish the first Jewish ghetto of World War II in her town of Piotrko´w Trybunalski. As the war escalates, Gucia and her family, friends, and neighbors suffer starvation, disease, and worse. She knows her blond hair and fair skin give her an advantage, and eventually she faces a harrowing choice: risk either the uncertain horrors of deportation to a concentration camp, or certain death if she is caught resisting. She decides to hide her identity as a Jew and adopts the gentile name Danuta Barbara Tanska. Barbara, nicknamed Basia, leaves behind everything and everyone she has ever known in order to claim a new life for herself.

Writing in the first person, author Planaria Price and Helen Reichmann West, Barbara's daughter, bring the immediacy of Barbara’s voice to this true account of a young woman whose unlikely survival hinges upon the same determination and defiant spirit already evident in the six-year-old girl we meet as this story begins. The final portion of this narrative, written by Helen, completes Barbara’s journey from her immigration to America until her natural, timely death.
Includes maps and photographs

“Price has boldly elected to tell the story in Basia’s own first-person, present-tense voice. The result is a dramatic, suspenseful account of survival in extremis, told in collaboration with Basia’s American daughter.” —Booklist

“Price's rendering of West’s mother’s early life reads like suspenseful historical fiction, telling a rarely heard side of the Jewish experience during WWII . . . Family, friendships, and romance give poignancy to this unique coming-of-age story, which is further enhanced by maps, a glossary, and an afterword.” —Publishers Weekly

“A rich exploration of a Holocaust survivor’s sheltered childhood, the atrocity that failed to destroy her, and her later life as an immigrant.” —Kirkus Reviews

“Told in a present tense, first-person narrative, this true story was written based on extensive interviews . . . Thanks to the detailed memories and the conversational tone, this book provides an engaging and informative reading experience with as much appeal as a fiction title. Recommended.” —School Library Journal

“A searing personal account full of unforgettable details, as well as broader questions about the ultimate meaning of her experience . . . offers an excellent opportunity to discuss the ways in which we reconstruct and remember the past.” —The Jewish Book Council

“I was completely engrossed by this drama of survival. Barbara Reichmann's story is quite extraordinary. It is sad, and terrible, and yet somehow captivating. The whole story of those who survived the Shoah by passing as Christians and working in Nazi Germany is an often forgotten part of the historical record.” —Kai Bird, Executive Director, Leon Levy Center for Biography at CUNY Graduate Center, and co-author of the Pulitzer Prize–winning American Prometheus: The Triumph and Tragedy of J. Robert Oppenheimer

“As occurs with The Diary of Anne Frank, this book merges the dire circumstances of the Holocaust with the tenuousness of being a teenager. But Claiming My Place expands the view provided in the diary for one critical reason. Anne Frank’s story is told within an isolated cocoon. In Barbara’s story, however, the Holocaust is in full view as her experiences unfold.” —David H. Lindquist, Ph.D., IPFW College of Education and Public Policy / Regional Museum Educator, United States Holocaust Memorial Museum

“This frightening true story of a young Jewish girl's flight from the deadly grip of the Nazis celebrates the surprising ingenuity and raw courage found only in the depths of the human spirit. Risking what few others dared, Barbara Reichmann, née Gucia Gomolinska, speaks with wisdom and uncommon self-awareness through her detailed, colorful, and evocative recollections from earliest childhood. In the final portion of this book, her daughter, Helen West, continues Barbara’s journey in an insightful and loving overview of Barbara’s life from the family’s arrival in New Orleans in 1951 until her death in 2007. This is a great read with the suspenseful, inspiring and uplifting appeal of a novel, about a character who will capture the reader’s heart.” —Allan Holzman, Peabody and Emmy Award-winning director and editor (Steven Spielberg’s Survivors of the Holocaust, Old Man River, The Native Americans)