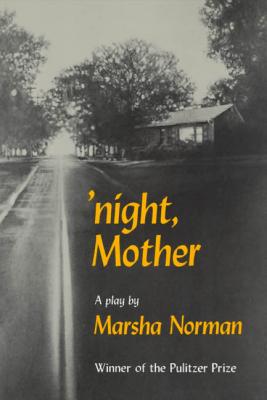 'night, Mother is a taut and fluid drama that addresses different emotions and special relations. By one of America's most talented playwrights, this play won the Dramatists Guild's prestigious Hull-Warriner Award, four Tony nominations, the Susan Smith Blackburn Prize, and the Pulitzer Prize in 1983.

'night, Mother had its world premiere at the American Repertory Theater in Cambridge, Massachusetts, in December 1982. It opened on Broadway in March 1983, directed by Tom Moore and starring Anne Pitoniak and Kathy Bates; a film, starring Anne Bancroft and Sissy Spacek, was released in 1986.

Kentucky-based playwright Marsha Norman was awarded a Pulitzer Prize for 'night, Mother and a Tony Award for her Broadway-musical adaptation of The Secret Garden. Her other plays include Getting Out, Third and Oak, Circus Valentine, The Holdup, and Traveler in the Dark.

“The subjects are suicide, love, and the meaning of life--as huge as they come; but they are treated with the specificity of threading a needle or choosing the right breakfast for your needs. Humor and pathos pop up as naturally as wild flowers or fences by the roadside; there is devastating psychological accuracy and nothing seems contrived; and there is that bustle of minutely perceived existential details that bespeak the master.” —John Simon, New York

“Ever since I first read 'night, Mother it has filled me with the kind of exaltation I experience only in the presence of a major dramatic work...” —Robert Brustein, The New Republic

“If there is such a thing as benign explosion, this play is it: it detonates with startling quietness, showering us with truth, compassion and uncompromising honesty...” —Jack Kroll, Newsweek

“A spare but lyrical dialogue, 'night, Mother probes deeply into the mother-daughter relationship while making a disturbing statement about responsibility and courage. It is as artfully designed as a sonata, rising in each dramatic movement until it arrives at its inevitable destination.” —The New York Times Magazine