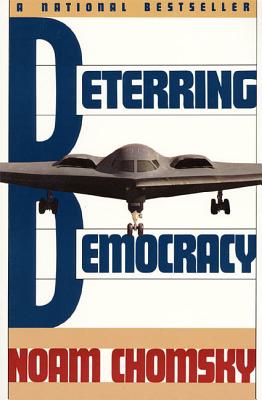 From World War II until the 1980s, the United States reigned supreme as both the economic and the military leader of the world. The major shifts in global politics that came about with the dismantling of the Eastern bloc have left the United States unchallenged as the preeminent military power, but American economic might has declined drastically in the face of competition, first from Germany and Japan ad more recently from newly prosperous countries elsewhere. In Deterring Democracy, the impassioned dissident intellectual Noam Chomsky points to the potentially catastrophic consequences of this new imbalance. Chomsky reveals a world in which the United States exploits its advantage ruthlessly to enforce its national interests--and in the process destroys weaker nations. The new world order (in which the New World give the orders) has arrived.

Noam Chomsky is the author of numerous bestselling political works, including Hegemony or Survival and Failed States. A laureate professor at the University of Arizona and professor emeritus of linguistics and philosophy at MIT, he is widely credited with having revolutionized modern linguistics. He lives in Tuscon, Arizona.

“A volatile, serious contribution to the debate over American's role as the globe's sole remaining superpower.” —San Francisco Chronicle

“[Offers] a deepened understanding of the dynamics of global politics before, during, and after the Cold War . . . A compendious and thought-provoking work.” —The New Statesman