The Death of Artemio Cruz: A Novel (FSG Classics) (Paperback) 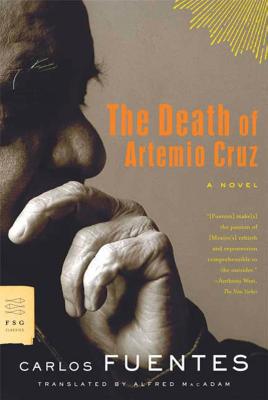 As the novel opens, Artemio Cruz, the all-powerful newspaper magnate and land baron, lies confined to his bed and, in dreamlike flashes, recalls the pivotal episodes of his life. Carlos Fuentes manipulates the ensuing kaleidoscope of images with dazzling inventiveness, layering memory upon memory, from Cruz's heroic campaigns during the Mexican Revolution, through his relentless climb from poverty to wealth, to his uneasy death. Perhaps Fuentes's masterpiece, The Death of Artemio Cruz is a haunting voyage into the soul of modern Mexico.

Carlos Fuentes (1928-2012) was one of the most influential and celebrated voices in Latin American literature. He was the author of 24 novels, including Aura, The Death of Artemio Cruz, The Old Gringo and Terra Nostra, and also wrote numerous plays, short stories, and essays. He received the 1987 Cervantes Prize, the Spanish-speaking world's highest literary honor.
Fuentes was born in Panama City, the son of Mexican parents, and moved to Mexico as a teenager. He served as an ambassador to England and France, and taught at universities including Harvard, Princeton, Brown and Columbia. He died in Mexico City in 2012.

“This is more than a retranslation of a masterpiece. It amounts to a restoration: here is the magnificent book that Fuentes wrote originally, superbly rendered by Alfred Mac Adam into an English version that precisely meshes with Fuentes's Spanish.” —Douglas Day

“Carlos Fuentes is perhaps the only living Latin-American writer who has it in him to do for his country what Euclides da Cunha did for Brazil in Os Sertoes, and to make the passion of the land's rebirth and repossession comprehensible to the outsider.” —Anthony West, The New Yorker

“Remarkable, in the scope of the human drama it pictures, the corrosive satire and sharp dialogue.” —Mildred Adams, The New York Times Book Review