The Death of My Father the Pope: A Memoir (Hardcover) 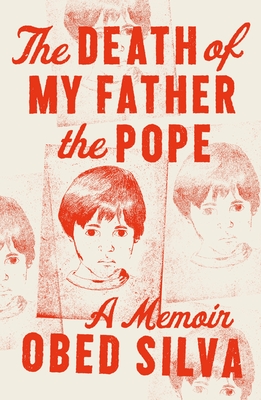 A man mourning his alcoholic father faces a paradox: to pay tribute, lay scorn upon, or pour a drink. A wrenching, dazzling, revelatory debut

Weaving between the preparations for his father's funeral and memories of life on both sides of the U.S.–Mexico border, Obed Silva chronicles his father's lifelong battle with alcoholism and the havoc it wreaked on his family. Silva and his mother had come north across the border to escape his father’s violent, drunken rages. His father had followed and danced dangerously in and out of the family’s life until he was arrested and deported back to Mexico, where he drank himself to death, one Carta Blanca at a time, at the age of forty-eight.

Told with a wry cynicism, a profane, profound anger, an antic, brutally honest voice, and a hard-won classical frame of reference, Silva channels the heartbreak of mourning while wrestling with the resentment and frustration caused by addiction. The Death of My Father the Pope is a fluid and dynamic combination of memoir and an examination of the power of language—and the introduction of a unique and powerful literary voice.

Obed Silva was born in Chihuahua, Mexico, and immigrated to the United States as a toddler. After years in the gang lifestyle—which left him paralyzed from the waist down, the result of a gunshot wound—he discovered the power of book learning, earned a master’s degree in medieval literature, and is now a respected English professor at East Los Angeles College. The Death of My Father the Pope is his first book.

"Compelling . . . Silva’s inner turmoil is relatable, his story engaging, and his arrival to a place of compassion unforgettable and poignant." —Rigoberto González, San Francisco Chronicle

"[Silva] never looks away. His book is an unrequited love story, told in fragments, through the lens of death." —David L. Ulin, Los Angeles Times

"[A] poignant debut . . . with bluntness and dark humor, [Silva] reflects on the addictions and abuses that addled his childhood . . . This lyrical memoir offers an indelible look at the complicated ways grief, family, and addiction can intertwine." —Publishers Weekly

"A ruthlessly honest memoir about the very complex emotions that can exist between parents and children." —Library Journal

“Obed's journey is high art of the transformative nature — that is, he descends into the bowels of familia, soars into the hearts and souls of father and brother and friends, drifts in and out of the city of Chihuahua, all the while revealing and lifting the veil of our discontents and connections to those we love and to those things that make and define our lives. An eloquent rendering of our times, told in a way that delivers in clear, precise thoughtfulness of la frontera and what it is to be mestizo, what it is to be Chicano, Mexican, trouble and peaceful, courageous, resentful, underscoring it all with what it means to be truly human. Everyone should read this memoir!” —Jimmy Baca, author of A Place to Stand

"In this wondrous memoir, the pain, the rage, and the fortitude of the Latino experience finds its full voice. Obed Silva fearlessly looks into the darkest corners of an immigrant family’s past, and creates a searing and unforgettable work of art. The Death of My Father the Pope is a landmark in the history of Latinx literature in the United States. This is the book we’ve been waiting for." —Héctor Tobar, author of Deep Down Dark

"Obed Silva's memoir is a magnificent and poignant achievement. Like the great literary giants he weaves throughout this narrative, we are brought to a rich and luminous excavation of the father wound, of the contours of death and the sure triumph of love. The Death of My Father the Pope is deeply affecting and a singular accomplishment. 'Impressionante!...Punto!'" —Greg Boyle, author of Tattoos on the Heart