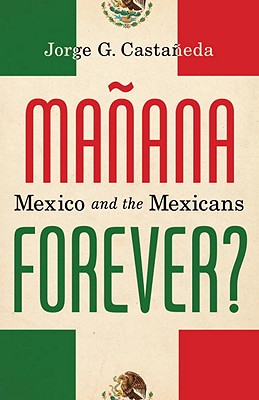 Why are Mexicans so successful in individual sports, but deficient in team play? Why do Mexicans dislike living in skyscrapers? Why do Mexicans love to see themselves as victims, but also love victims? And why, though the Mexican people traditionally avoid conflict, is there so much violence in a country where many leaders have died by assassination?

In this shrewd and fascinating book, the renowned scholar and former foreign minister Jorge Castañeda sheds much light on the puzzling paradoxes of his native country. Here’s a nation of 110 million that has an ambivalent and complicated relationship with the United States yet is host to more American expatriates than any country in the world. Its people tend to resent foreigners yet have made the nation a hugely popular tourist destination. Mexican individualism and individual ties to the land reflect a desire to conserve the past and slow the route to uncertain modernity.

Castañeda examines the future possibilities for Mexico as it becomes more diverse in its regional identities, socially more homogenous, its character and culture the instruments of change rather than sources of stagnation, its political system more open and democratic. Mañana Forever? is a compelling portrait of a nation at a crossroads.

Jorge G. Castaneda was born and raised in Mexico City. He received his B.A. from Princeton University and his Ph.D. from the University of Paris. He has been a professor of political science at the National Autonomous University of Mexico, a senior associate of the Carnegie Endowment for International Peace in Washington, D.C., and a visiting professor at Princeton University and the University of California at Berkeley. He was Mexico's foreign minister from 2000 to 2003, and is now Global Distinguished Professor of Politics and Latin American Studies at New York University. He is a member of the board of Human Rights Watch and lives in New York and Mexico City.

“This important book, by an exceptionally shrewd, sophisticated and deeply knowledgeable analyst, deserves a place on the short shelf of classics about modern Mexico that includes Alan Riding’s Distant Neighbors and Paz’s The Labyrinth of Solitude.” —Los Angeles Times

“Castañeda presents an impassioned and erudite case for a rethinking of old Mexican habits. His background makes him especially well positioned to explain his native land to an international audience.” —The New York Times Book Review

“A revolutionary book about Mexico. . . . I never thought I would read a book by a Mexican that acknowledges that Mexicans have more to gain in venturing to America than U.S. dollars.” —Richard Rodriguez, The San Francisco Chronicle

“A lively and perceptive analysis of Mexican society. . . . [Castañeda] is an unusual and important voice in Mexico.” —The Economist