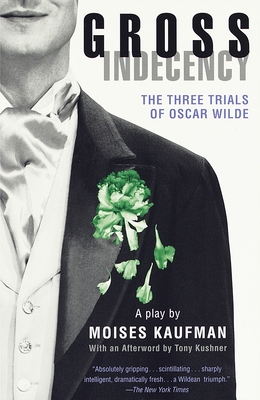 By Moises Kaufman
$14.00
Possibly out of print. Email or call to check availability and price.

Winner of the Lambda Literary Award

In this stunning work of theater, Moises Kaufman turns the trials of Oscar Wilde into a riveting human and intellectual drama.

In April 1895 Oscar Wilde brought a libel suit against the Marquess of Queensberry, the father of his youthful lover, who had publicly maligned him as a sodomite. In doing so, England's reigning man of letters set in motion a series of events that would culminate in his ruin and imprisonment. For within a year the bewildered Wilde himself was on trial for acts of "gross indecency" and, implicitly—for a vision of art that outraged Victorian propriety. Expertly interweaving courtroom testimony with excerpts from Wilde's writings and the words of his contemporaries, Gross Indecency unveils its subject in all his genius and human frailty, his age in all its complacency and repression. The result is a play that will be read and studied for decades to come.

Moisés Kaufman is a Tony and Emmy-nominated director and playwright. He is the co-founder and artistic director of Tectonic Theater Project. Kaufman’s plays Gross Indecency: The Three Trials of Oscar Wilde, and The Laramie Project (which he co-wrote with the members of Tectonic Theater) have been among the most performed plays in America over the last decade. He is also the author of the Tony Nominated play 33 Variations; One Arm (his adaptation of the Tennessee Williams screenplay of the same name); and the short play London Mosquitoes. He has directed numerous plays on Broadway including the Pulitzer and Tony Award-winning I Am My Own Wife by Doug Wright which earned Mr. Kaufman an Obie Award for direction as well as Tony, Outer Critics, Lucille Lortell, Drama Desk Awards nominations. Kaufman directed the film adaptation of The Laramie Project, which aired on HBO and was the opening night selection at the 2002 Sundance Film Festival. Kaufman is a Guggenheim Fellow.

"Thrilling . . . unforgettable, maybe even life-changing. . . . [It has] the inevitability and much of the monumentality of a Greek tragedy." --USA Today