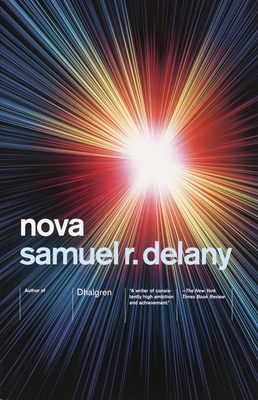 Given that the suns of Draco stretch almost sixteen light years from end to end, it stands to reason that the cost of transportation is the most important factor of the 32nd century. And since Illyrion is the element most needed for space travel, Lorq von Ray is plenty willing to fly through the core of a recently imploded sun in order to obtain seven tons of it. The potential for profit is so great that Lorq has little difficulty cobbling together an alluring crew that includes a gypsy musician and a moon-obsessed scholar interested in the ancient art of writing a novel. What the crew doesn’t know, though, is that Lorq’s quest is actually fueled by a private revenge so consuming that he’ll stop at nothing to achieve it. In the grandest manner of speculative fiction, Nova is a wise and witty classic that casts a fascinating new light on some of humanity’s oldest truths and enduring myths.

“Here are (at least some of) the ways you can read Nova: As fast-action far-flung interstellar adventure; as archetypal mystical/mythical allegory (in which the Tarot and the Grail both figure prominently); as modern myth told in the SF idiom . . . The reader observes, recollect, or participates in a range of personal human experience including violent pain and disfigurement, sensory deprivation and overload, man-machine communion, the drug experience, the creative experience—and interpersonal relationships which include incest and assassination, father-son, leader-follower, human-pet, and lots more.” —Judith Merrill, The Magazine of Fantasy and Science Fiction

“Samuel R. Delany, right now, as of this book, Nova, not as of some future book or some accumulated body of work, is the best science-fiction writer in the world, at a time when competition for that status is intense. I don’t see how a science fiction writer can do more than wring your heart while explaining how it works. No writer can. The special thing that science fiction does is to first credibly place the heart in an unconventional environment. A particular thing that recent science fiction has been doing is to make that unconventional environment a technological one. Another has been to make it a romantic one, sometimes calling it an intensely humanistic one . . . All of these things are accomplished in Nova.” —A.J. Budrys, Galaxy Magazine

“One of the most complete and fully realized pictures of an interstellar society that I have ever read.” —Norman Spinrad, Science Fiction Times