Asylums: Essays on the Social Situation of Mental Patients and Other Inmates (Paperback) 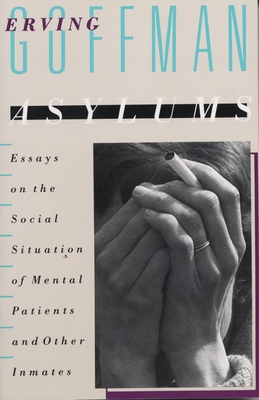 Asylums is an analysis of life in "total institutions" -- closed worlds such as prisons, army training camps, naval vessels, boarding schools, monastaries, nursing homes and mental hospitals -- where the inmates are regimented, surrounded by other inmates, and unable to leave the premises. It describes what these institutions make of the inmate, and what he or she can make of life inside them. Special attention is focused on mental hospitals, drawing on the author's year of field work at St. Elizabeth's in Washington, D.C., one of America's most well-known institutions. It is the thesis of this book that the most important factor in forming a mental-hospital patient is the institution, not the illness, and that the patient's reactions and adjustments are those of inmates in other types of institutions as well.

The first essay is a general portrait of life in a total instituion.  The other three consider special aspects of this existence: the initial effects of institutionlization on the inmate's previous social relationships; the ways of adapting once in the institution; and the role of the staff in presenting to the inmate the facts of his or her situation.

Erving Goffman was born in Canada in 1922. He received his B.A. from the University of Toronto in 1945 and then studied at the University of Chicago, receiving his M.A. in 1949 and his Ph.D. in 1953.  For a year he lived on one of the smaller of the Shetland Isles while he gathered material for a dissertation on that community, and later he served as a visiting scientist at the National Institute of Mental Health in Washington. Mr. Goffman is the author of several articles and book reviews which have appeared in such periodicals as Psychiatry and the American Journal of Sociology. He is also the author of, among other works, The Presentation of Self in Everyday Life, Asylums, Interaction Ritual,and Stigma