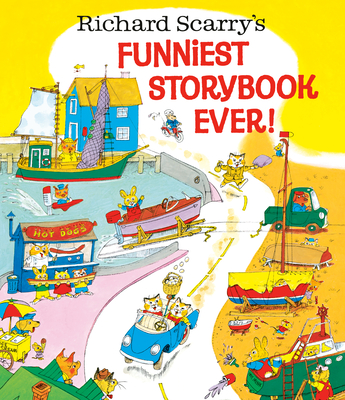 Richard Scarry’s classic collection of his funniest stories is back in print! All your favorite Busytown characters are back and getting up to countless silly situations. Whether it’s an out-of-control mix-up with Ma Pig’s new car, babysitters making accidental exploding fudge, sneaky mice pirates taking over Uncle Willie’s ship, or even a talking loaf of bread that baffles Humperdink the Baker and Lowly Worm, young readers will be rolling on the floor with laughter thanks to the hysterical hijinks found in this Funniest Storybook Ever! Note: Includes some stories that also appear in Richard Scarry's Favorite Storybook Ever.

RICHARD SCARRY is one of the world’s best-loved children’s authors EVER! In his extraordinary career, Scarry illustrated over 150 books, many of which have never been out of print. His books have sold over 100 million copies around the world and are currently published in over twenty languages. No other illustrator has shown such a lively interest in the words and concepts of early childhood. Richard Scarry was posthumously awarded a Lifetime Achievement Award from the Society of Illustrators in 2012.