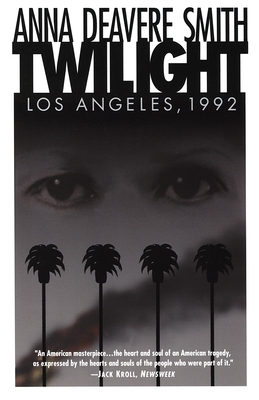 From an acclaimed playwright comes "an American masterpiece" (Newsweek) about the 1992 Los Angeles riots.

A work that goes directly to the heart of the issues of race and class, Twilight ruthlessly probes the language and the lives of its subjects, offering stark insight into the complex and pressing social, economic, and political issues that fueled the flames in the wake of the Rodney King verdict and ignited a conversation about policing and race that continues today.

ANNA DEAVERE SMITH is an actor, teacher, playwright, and the creator of an acclaimed series of one-woman plays based on her interviews with diverse voices from communities in crisis.  She has won two Obie Awards, two Tony nominations for her play Twilight: Los Angeles, 1992, and a MacArthur Fellowship.  She was a Pulitzer Prize finalist for her play Fires in the Mirror. She has had roles in the films Philadelphia, The American President, The Human Stain, and Rent, and she has worked in television on The Practice, Presideo Med, The West Wing, and Nurse Jackie.  The founder and director of the Institute on the Arts and Civic Dialogue, she teaches at New York University.

"An American masterpiece ... the heart and soul of an American tragedy, as expressed by the hearts and souls of the people who were part of it." —Newsweek