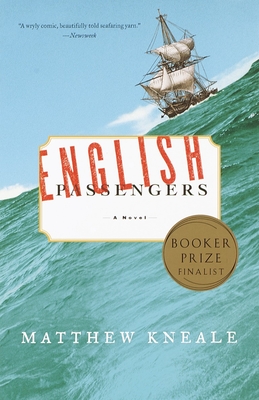 In 1857 when Captain Illiam Quillian Kewley and his band of rum smugglers from the Isle of Man have most of their contraband confiscated by British Customs, they are forced to put their ship up for charter. The only takers are two eccentric Englishmen who want to embark for the other side of the globe. The Reverend Geoffrey Wilson believes the Garden of Eden was on the island of Tasmania. His traveling partner, Dr. Thomas Potter, unbeknownst to Wilson, is developing a sinister thesis about the races of men.

Meanwhile, an aboriginal in Tasmania named Peevay recounts his people’s struggles against the invading British, a story that begins in 1824, moves into the present with approach of the English passengers in 1857, and extends into the future in 1870. These characters and many others come together in a storm of voices that vividly bring a past age to life.

Matthew Kneale, the author of several novels, lives in Italy. English Passengers is his American debut.

"English Passengers is what fiction ought to be: ambitious, narrative-driven, with a story and a quest we don't mind going on. On page after page I found myself laughing or nodding or simply envious. I was compelled from first to last, and beyond. The characters are still living with me."
--Nicholas Shakespeare

"The brutal hand of British imperialism provides the foundation for this broad historical swashbuckler about the English colonization of Tasmania... Kneale's careful research and colorful storytelling result in an impressive epic."
--Publishers Weekly (starred review)