Uncertainty: Einstein, Heisenberg, Bohr, and the Struggle for the Soul of Science (Hardcover) 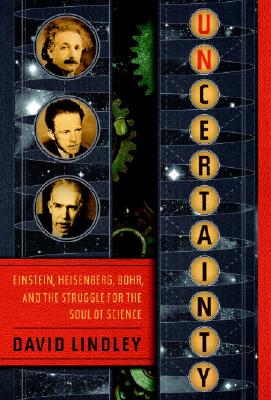 By David Lindley
$26.00
Possibly out of print. Email or call to check availability and price.

The more precisely the position is determined, the less precisely the momentum is known in this instant, and vice versa.
—Werner Heisenberg

That God would choose to play dice with the world is something I cannot believe.
—Albert Einstein

Nothing exists until it is measured.
—Neils Bohr


The remarkable story of a startling scientific idea that ignited a battle among the greatest minds of the twentieth century and profoundly influenced intellectual inquiry in fields ranging from physics to literary criticism, anthropology and journalism

In 1927, the young German physicist Werner Heisenberg challenged centuries of scientific understanding when he introduced what came to be known as “the uncertainty principle.” Building on his own radical innovations in quantum theory, Heisenberg proved that in many physical measurements, you can obtain one bit of information only at the price of losing another. Heisenberg’s principle implied that scientific quantities/concepts do not have absolute, independent meaning, but acquire meaning only in terms of the experiments used to measure them. This proposition, undermining the cherished belief that science could reveal the physical world with limitless detail and precision, placed Heisenberg in direct opposition to the revered Albert Einstein. The eminent scientist Niels Bohr, Heisenberg’s mentor and Einstein’s long-time friend, found himself caught between the two.
Uncertainty chronicles the birth and evolution of one of the most significant findings in the history of science, and portrays the clash of ideas and personalities it provoked. Einstein was emotionally as well as intellectually determined to prove the uncertainty principle false. Heisenberg represented a new generation of physicists who believed that quantum theory overthrew the old certainties; confident of his reasoning, Heisenberg dismissed Einstein’s objections. Bohr understood that Heisenberg was correct, but he also recognized the vital necessity of gaining Einstein’s support as the world faced the shocking implications of Heisenberg’s principle.

david lindley holds a Ph.D. in astrophysics and has been an editor at "Nature," "Science," and "Science News." He is the author of "The End of Physics," "Degrees Kelvin," "Where Does the Weirdness Go?, " and "Boltzmann's Atom." He lives in Alexandria, Virginia.

“Lindley brilliantly captures the personalities and the science surrounding the most revolutionary principle in modern physics. At stake are our deepest philosophical beliefs about reality. This book is so lucid that the issues are not merely understandable but truly thrilling.”

—Walter Isaacson, author of Benjamin Franklin: An American Life and Einstein: His Life and Universe

“In this always smart, and often beautiful, book, David Lindley illuminates some of the most intriguing theories in physics. The ideas themselves take their shape through the equally complicated lives and hopes of scientists determined to make sense of a seemingly impossible universe. In illuminating both—the elusive and elegant laws of physics, the scientists who struggled to decipher them—Uncertainty rightfully reminds us that the most difficult puzzles in the world around us are solved by both our minds—and our hearts.”

—Deborah Blum, author of Ghost Hunters: William James and the Search for Scientific Proof of Life After Death

“Lindley’s description of one of the most dramatic revolutions in scientific thinking is truly fascinating. The ideas, and the lives of the originators of these ideas, become masterfully intertwined.”

—Mario Livio, senior astrophysicist, Space Telescope Science Institute, and author of The Golden Ratio: The Story of Phi, the World’s Most Astonishing Number