Uncentering the Earth: Copernicus and The Revolutions of the Heavenly Spheres (Great Discoveries) (Paperback) 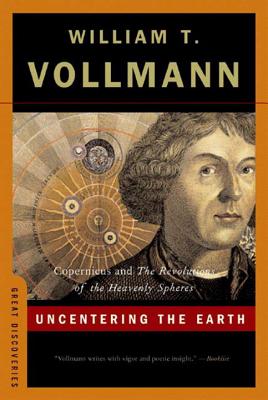 By William T. Vollmann
$15.95
Possibly out of print. Email or call to check availability and price.

“Highly personal and philosophical . . . the next best thing to reading Copernicus.”—Publishers Weekly

In 1543, the Polish astronomer Nicolaus Copernicus lay on his deathbed, reportedly holding his just-published masterpiece, The Revolutions of the Heavenly Spheres, in his hands. Placing the sun at the center of the universe, Copernicus launched modern science, leading to a completely new understanding of the universe, and humanity's place within it.

But what did Copernicus really believe? Some argue that he anticipated the vast secularizing impact his ideas would have on history. Others contend that Copernicus was a man of his time and, on the whole, accepted its worldview. William T. Vollmann navigates this territory with the energetic prose and powerful intelligence for which he is known, providing a fresh and enlightening explication of Copernicus, his book, and his time, and the momentous clash between them.

William T. Vollmann is the author of The Atlas (winner of the 1997 PEN Center West Award), Seven Dreams: A Book of North American Landscapes, and Europe Central. His nonfiction includes Rising Up and Rising Down which was nominated for the National Book Critics Circle Award in 2003, and his novel Europe Central won the National Book Award in 2005.

Energetic, piquant, and contextually rich. . . . Vollmann writes with vigor and poetic insight about the evolution of science.
— Booklist

Peppered with intrigue, conflict and even a little human interest.
— Kirkus Reviews