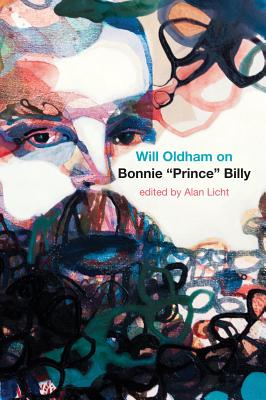 A captivating and revelatory glimpse into the life of one of the most critically acclaimed and enigmatic musicians working today.

The man who acts under the name Will Oldham and sings and composes under the name Bonnie “Prince” Billy has, over the past quarter-century, made an idiosyncratic journey through, and an indelible mark on, the worlds of indie rock and independent cinema. These conversations with longtime friend and associate Alan Licht probe his highly individualistic approach to music making and the music industry, one that cherishes intimacy, community, mystery, and spontaneity. Exploring Oldham’s travels and artistic influences while discussing his experiences with such disparate figures as Johnny Cash, Bjork, James Earl Jones, and R. Kelly, the book conveys the brilliance that has captivated fans and made Oldham one of our most influential and beloved songsmiths.

Oldham has declared this book his “last interview”—an essential guide to his life and career. Featuring a full discography, it offers the most in-depth look we may ever get of this fascinating cult figure.

Performing as himself, Palace Brothers, or Bonnie "Prince" Billy, Will Oldham has released more than twenty studio albums, along with EPs, singles, and music for film and television. He is a longtime denizen of Louisville, Kentucky.

Alan Licht is a musician and author of the book Sound Art: Beyond Music Between Categories. He lives in Brooklyn, New York.

Like Bob Dylan, Will Oldham is as famous for his elusiveness as for his work, a string of often-dark, sometimes-raunchy, always-rewarding indie-folk dispatches stretching back two decades. This quasimemoir from the man known as Bonnie “Prince” Billy is a meandering yet enthralling book-length interview conducted by longtime friend and fellow musician Alan Licht. Happily, it shares an important trait with the magical 2004 Bob Dylan tome Chronicles: Volume One: It illuminates its subject while preserving his mystique.