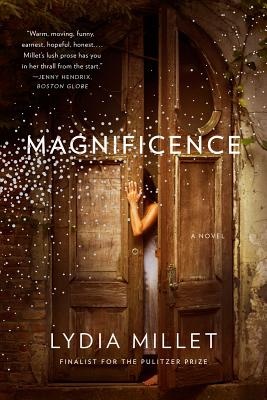 “Susan is a serial adulterer whose life is shattered by her husband's sudden death. As she struggles to maintain a healthy relationship with her grown, paraplegic daughter, she unexpectedly inherits a mansion from a distant relative who had filled the magnificent house with stuffed and mounted animals from around the world. The novel explores the many forms that loss can take -- a loved one's death when it is too late to make amends; a daughter's loss of a life filled with possibilities if not for her accident; the slow deterioration of personality in the elderly with dementia; and the loss of animals in the wild to extinction. At once funny and touching.”
— Karen Vail, Titcomb's Bookshop, East Sandwich, MA

A woman embarks on a dazzling new phase in her life after inheriting a sprawling mansion and its vast collection of taxidermy.

Pulitzer Prize finalist Lydia Millet is "one of the most acclaimed novelists of her generation" (Scott Timberg, Los Angeles Times). Salon praised her for writing that is "always flawlessly beautiful, reaching for an experience that precedes language itself." The Village Voice added, "If Kurt Vonnegut were still alive, he would be extremely jealous."


This stunning new novel presents Susan Lindley, a woman adrift after her husband’s death and the dissolution of her family. Embarking on a new phase in her life after inheriting her uncle’s sprawling mansion and its vast collection of taxidermy, Susan decides to restore the neglected, moth-eaten animal mounts, tending to “the fur and feathers, the beaks, the bones and shimmering tails.” Meanwhile an equally derelict human menagerie—including an unfaithful husband and a chorus of eccentric old women—joins her in residence.

In a setting both wondrous and absurd, Susan defends her legacy from freeloading relatives and explores the mansion’s unknown spaces. Funny and heartbreaking, Magnificence explores evolution and extinction, children and parenthood, loss and revelation. The result is the rapturous final act to the critically acclaimed cycle of novels that began with How the Dead Dream.

Lydia Millet is the author of A Children’s Bible, a finalist for the National Book Award and a New York Times 10 Best Book of 2020, among other works of fiction. She lives in Tucson, Arizona.

[Magnificence is] elegant, darkly comic…with overtones variously of Muriel Spark, Edward Gorey and J. G. Ballard, full of contemporary wit and devilish fateful turns for her characters, and then also to knit together into a tapestry of vast implication and ethical urgency, something as large as any writer could attempt: a kind of allegorical elegy for life on a dying planet. Ours, that is.

Millet’s prose, which is both sensitive and strange... creates a thick atmosphere that immediately pulls the reader deep into this saga of love, death, sex, and taxidermy.
— NewYorker.com

...[W]arm, moving, funny, earnest, hopeful, honest, and engaged in a way at odds with current literary fashion…Millet’s lush prose has you in her thrall from the start.
— Jenny Hendrix - Boston Globe

[A] novel of ideas or philosophy, disguised as a portrait of one woman’s midlife upheaval.
— Laura Miller - Salon

Starred review. [An] elegant meditation on death and what it means to be alone, even you’re not…  A dazzling prose stylist, Millet elevates her story[,] …exploring grief and love as though they were animals to be stuffed, burrowing in deep and scooping out the innermost layers.
— Publishers Weekly

... draws a detailed map of the healing process of an adulterous wife who suddenly finds herself a widow…. The deeply honest, beautiful meditations on love, grief and guilt give way to a curlicued comic-romantic mystery complete with a secret basement and assorted eccentrics.
— Kirkus Reviews

There’s much to explore in Magnificence, which is ambitious, often funny and deliciously provocative. One needn’t have read the entire series to be consumed by its pleasures, but by the time you reach its beautiful end, considerable comfort lies in the existence of two more novels in which to delight in Millet’s writing and imagination.